Celebrating Science Outside the Lab

Why we do experiments, even if they don't work

This summer I voluntarily stayed up all night for about nine days to stare at some computer screens and push some buttons. Voluntarily, I became a true night dweller by waking up at 7pm and going to bed at 8am.

I wasn’t practicing some weird voodoo sleeping schedule or avoiding the sunlight. I was working a 12-hour shift at the DESY beamline in Hamburg, Germany. The beamline (or synchrotron) is a giant circular beam of high intensity X-rays. It travels in a ring-like tunnel and scientists all around the world come for a week or two to connect their set-ups to the beam and do their various experiments. 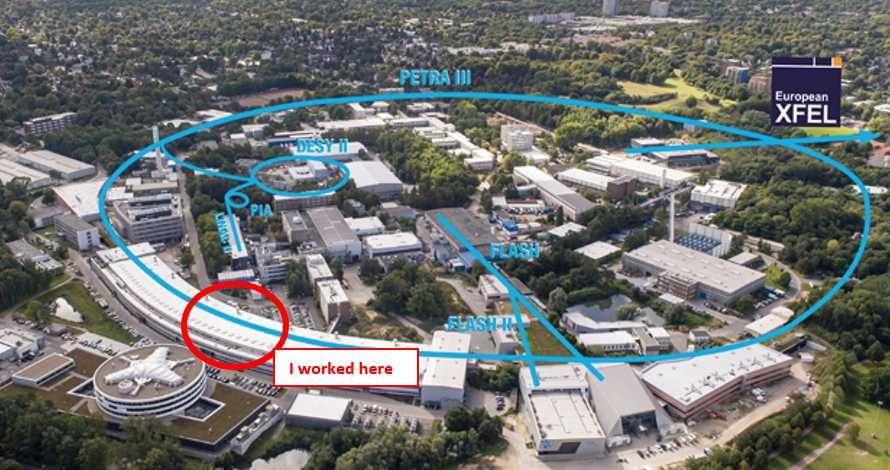 For the first two days of the night shift, everything was a bit of a blur. I was still getting used to what buttons to press and what the main experimental strategies were. I also got sick, so I found myself roaming through unfamiliar cobblestoned streets of Hamburg to find the nearest Apotheke (a pharmacy, but unlike the American CVS, this one only sells medicine). I had only been in Germany for about a week at that point, so it was quite an adventure. Not having any German speaking experience, Sprechen Sie Englisch? (and sometimes even the language of mimes!) became my new best friend.

Despite my initial cultural cluelessness, I was really excited to do an experiment with the light beam on some magnetic materials, which is my area of research. With my sleeping schedule back on track, I would arrive to our little desk space and equipment set-up. There were not too many classic “offices” here. It was really like a bunch of cubicles around one giant ring of light, occupied by researchers from all over the world. Sometimes I would bump into them in the little kitchen on the periphery of this “circle”, where I would make some famous rostbratwurst sandwiches for myself for “lunch.” If you can consider it a lunch at 1AM, in this timeframe (or lab frame, get it?).

My senior group member and I were like detectives, trying to find a thread of a clue—trying to find a way to move tiny magnetic particles with current. At the same time, we were also like technicians, trying to fix many technical issues before getting to the real deal. And even a bit like audience members of a magic show, who have a clue as to how the trick works, but can’t quite get into the mind of the magician.

In fact, most of the time our experiment didn’t work as we’d expect. Or didn’t work at all. Sometimes our sample “blew up,” or broke, when we overestimated some numbers. Or we underestimated them and nothing happened. Or we just didn’t see what we would expect, at all. And there was little we could do to predict what would happen, since there were SO many variables that could affect the outcome. So really, the success of an experiment is all about all the right stars—I mean, variables—aligning. It definitely needs some luck, and the luck can just be increased by good preparation. Also, lots of patience and good humor. Otherwise, it is virtually impossible to deal with mishaps and accidental failures, which happen way too much, to the point where they are no longer “failures” but part of the experimental process.

“Why do experiments if they don’t work?” several people have asked me when I got back to MIT. And they have a point. Experiments might not work 90% of the time, or at least not give us the results we want. But in my mind, the 10% of the time that they do work makes the frustration that comes with the 90% quite worth it. So we have a choice—to either despair and give up when things don’t work, or just try something new until it finally does.

For the remainder of my time in Germany (about two months!) after the beamtime, I worked at the Max Born Institute in Berlin (MBI), also as part of and thanks to MISTI Germany. I was growing and optimizing magnetic thin-films that could potentially be used in magnetic memory and storage devices. Here I saw another side of experimentation that became like a detective novel: troubleshooting, or looking for the culprit when something doesn’t work.

When I was just getting started with growing thin films, I got lots of wisdom from a German scientist who has been doing it for quite a while. Incidentally his name was Sascha, just like mine. Whenever something went wrong with the set-up, Sascha knew exactly what to do, and why it failed. Even when an issue seemed irreparable, he didn’t despair and pulled something new out of his bag of tricks. There was something exciting about finally fixing a problem, or growing a film with the desired properties.

It is comparable to cooking a very nice dinner from scratch ingredients. There isn’t anything there before you start. Just raw vegetables, meat, rice, and spices. You need some practice and technique to turn it into an edible goodness. Similarly, for magnetic film growth, we start with raw materials, like iron, cobalt alloys, platinum and tantalum. After adding some high power, we end up energizing these atoms and coating them onto blank substrates. Once the recipe is complete, and the ingredients are of the correct quantity and order, we take it out and try the meal. There is always space to optimize the quality and ratio of the ingredients to make the dish better and better. Sure, the dish might not come out all that good at first. It may even be terrible. But it is a learning experience, an adventure, a creation of something out of nothing. Of knowing that eventually, it will be worthwhile. And that is why we do it.