Celebrating Science Outside the Lab

In March 2020, a breadmaking epidemic struck the world. Legions of Youtube gurus, bloggers, and social media users began posting their recipes and adventures in breadmaking, especially sourdough, the type of bread which uses a live starter culture. The creators of xkcd even demystified this phenomenon, implying that coronavirus and bread yeast are symbiotic due to the timing of the baking craze and the pandemic. Interestingly, I did not start baking bread until about mid-June 2020, and my sourdough starter was born on August 26th. His name is Atlas. Throughout my sourdough journey, from miserable failures to the “perfect loaf”, I found many parallels to the experiments I do in the lab as a materials scientist…

(left) My sourdough starter, Atlas, at peak activity (blue marks the level of the starter before I fed it!). (right) My recently baked “perfect loaf”.

1. Sourdough bread has many “knobs” to change its properties, just like a process in the clean room – such as nanofilm structure growth. In materials science, thin film growth is extremely  sensitive to the environment inside the growth chamber (e.g. gas pressure and temperature are knobs that can be tuned to control the growth characteristics, such as grain size and homogeneity). Similarly, everything about sourdough is very sensitive to its environment. The sour flavor of sourdough originates from the acidic byproducts of bacteria and microorganisms in the starter. The type of flour, the feeding schedule of the starter (yes, you need to feed it – it’s practically a pet!!), the bubbling ability of the starter, and the stage to which your bread has fermented all influence the taste and the “microstructure” of the crumb. Even the humidity – just like in the lab – is a significant factor and may influence your end result.

This amount of fine-tuning knobs is very different from typical yeasted bread. Yeasted bread, which is baked with commercial yeast, sugar, and flour and salt, has very few variables you can control to change its taste and structure. It usually has a fine crumb, no defined “bubbles” in its cross-section, and comes out uniformly similar every single time you bake it. That’s no fun at all, is it?

2. As a beginner, you’ll encounter many setbacks and failures. Your starter may get sick and die if you forget to feed it as often as it requires (not so common, but maybe common if you’re a busy PhD student trying to maintain a starter). Thankfully, Atlas is still going strong as it approaches its first birthday. Your very first real sourdough loaf though, like mine, will probably not be a work of culinary art. Your dough may over-ferment before you have a chance to put it in the oven, making it a shapeless, wet mess that can only be salvaged by being baked in a bread pan. (Thankfully, there are some tricks to prevent this disaster from taking place – I found out the hard way!) It’s quite similar, I discovered, to working in a cleanroom while doing fabrication of micrometer-sized devices. When you first need to complete a non-trivial processing recipe there, you will most likely run into trouble, and need to troubleshoot and re-do. But, it’s part of the learning process, so no need to be hard on yourself. Also, both processes involve lots of baking, waiting, and measuring of ingredients – especially if you are doing photolithography and material deposition! 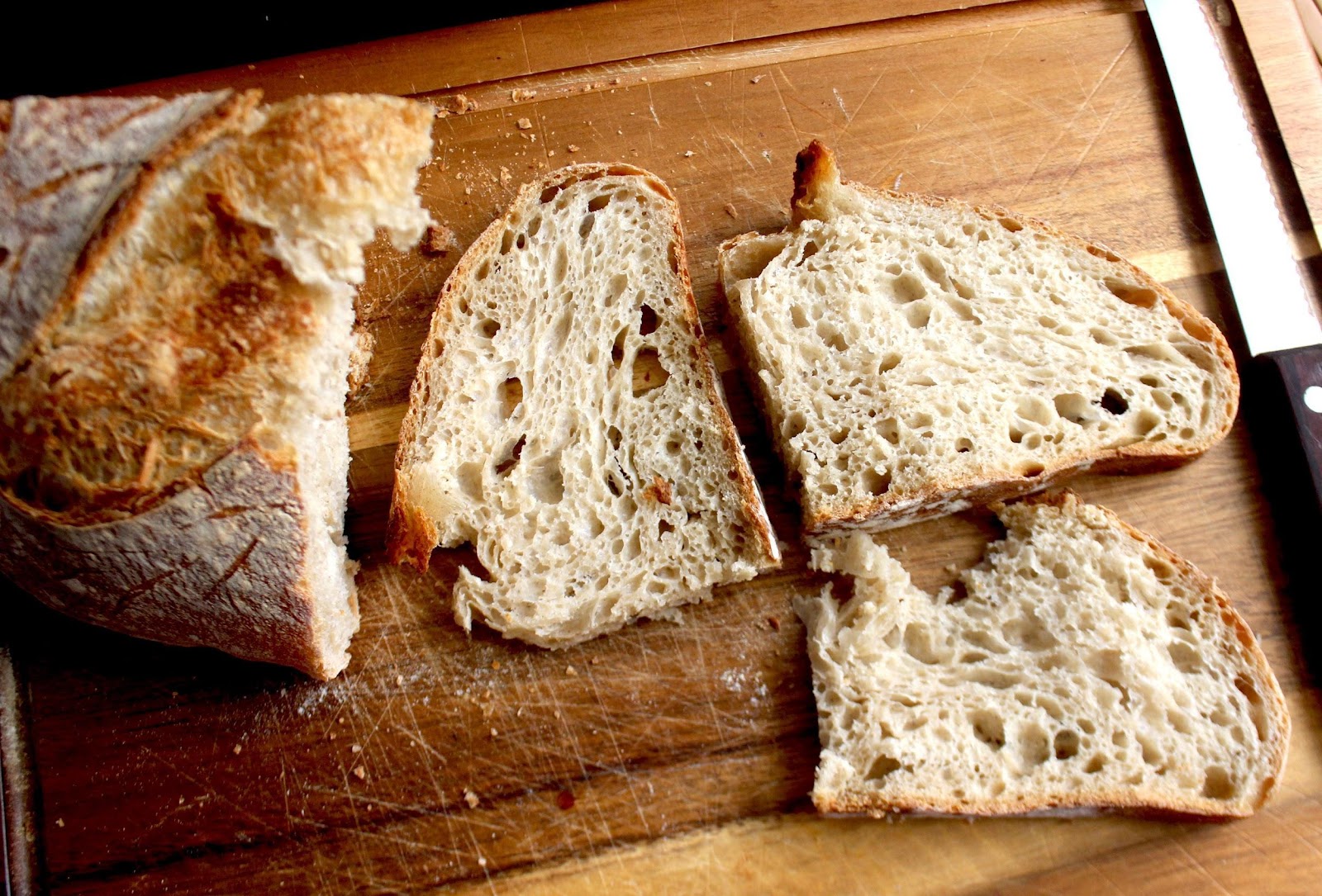 The distinct sourdough “open crumb” microstructure is not present in regular yeasted bread.

3. Creating your own recipe involves a bit of crowdsourcing. I’m at the stage of breadmaking – and nanofabrication – where I am using my own recipe, which is actually a bit of a Frankenstein monster. I find that it is impossible not to crowdsource wisdom when you work in the cleanroom. I am so lucky to learn some amazing tips (and even recipes!) for photolithography, material deposition, device design, and more from many different people – from my senior labmates to my seasoned “fab friends” who simply do a lot more fabrication than I can ever imagine doing in a lifetime to the cleanroom staff with Yoda-levels of wisdom… Thanks to all this invaluable input, I was able to come up with a fabrication process that works for me, and yields exactly what I want. Similarly, my current go-to sourdough recipe has elements of my own insight, as well as a collection of parts taken from various tutorials and recipes. For example, one German Youtuber does an amazing job at showing me how to shape bread so that it doesn’t end up like a frisbee. Another Youtuber from Korea showed me how to add inclusions like seeds and nuts. One recipe from an American food blogger has a dough hydration ratio which I found makes a great texture.

4. The “Eureka!” moment. That’s the moment you love to have in the lab. Things just come together, and a process you have been working on for a week has turned out perfectly and is set to yield much fruitful data. Or a small part in the fabrication recipe which you troubleshooted and improved turned out to be the very knob which made your result exactly what you wanted. I have experienced the same “Eureka!” moment with sourdough baking, too. That moment when you take the bread out of the oven and you just know it could not have risen more – or had a more beautiful crumb when you slice into it. Maybe that feeling of elation and happiness at this not-that-significant milestone is a bit too much, but who can blame me? This is why we do science, right?

5. Ultimately, it comes down to intuition. The thing about sourdough is that you can’t just follow someone else’s recipe to get your desired result. Since the temperature of the room directly affects the rate of fermentation, you can’t just use the same rise time as someone else. The humidity of the kitchen will also impact the fermentation rate and the structure development, throwing away any strict “let dough rise for n number of hours” out the window. In fact, one of the most crucial variables in sourdough is the hydration of your dough – the ratio of flour to water. The higher the hydration, the harder it is to work with (and shape into a beautiful loaf that will rise to its maximum potential), but also the more beautiful and airy the bubble structure of the crumb. Similarly, a lot of thin film fabrication processes are almost intuitive once you do it often enough, and sometimes, more “intricate” recipes make the perfect nanostructures. Difficulty has a high pay-off.

Your intuition develops when you know what to look for in your dough, despite a whirlwind of your kitchen’s environment factors which are never identical to those of a recipe writer. You need to look for the signs of too much or too little fermentation at a given stage of your process. When I was starting out, the “poke test” has been most helpful, which reveals the “springy-ness” of the dough and rising potential during baking.

Before this year, I would never have thought that the feeling of bliss when taking out a “perfect”, aromatic loaf out of the oven is very much similar to that of making a working sample in the lab. But, here I am. Giddily excited about taking out an aromatic, piping hot boule from the oven, like it’s the best thing that’s ever happened to me. Maybe it is?