A diploma, a discovery, and an historic legacy 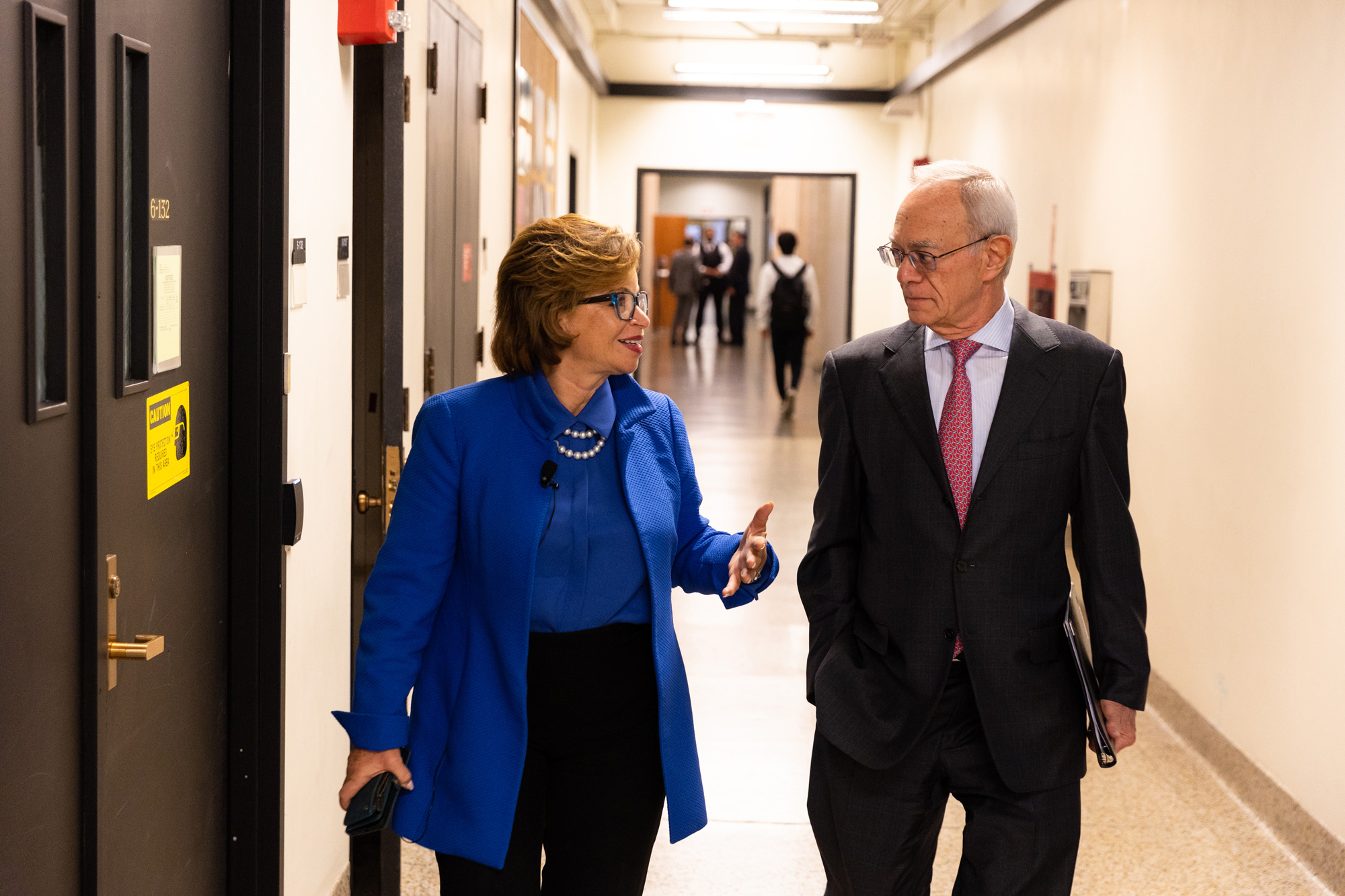 Now restored by MIT preservation experts and on loan to the Institute, the diploma is on display at the new MIT Museum, which opened to the public on Oct. 2 in Kendall Square.

“I want to say, on behalf of my entire family, how deeply moved we are by this event, and the way MIT has embraced the vision and spirit of my great-grandfather,” said Jarrett, who served as a senior advisor to former U.S. President Barack Obama and is now CEO of the Obama Foundation in Chicago.

“I cannot tell you how incredible your personal support, and your stewardship of my great-grandfather’s legacy, has been,” Jarrett told MIT President L. Rafael Reif — who has kept a framed photo of Taylor on the walls of his MIT offices for the last 20 years.

After leaving MIT, Taylor became the influential lead architect of the Tuskegee Institute in Alabama — now known as Tuskegee University, one of the nation’s leading historically Black universities.

The event, “Robert Robinson Taylor: Building on the Legacy of MIT’s First Black Graduate,” was held on campus on Sept. 30 and featured remarks by Jarrett, Reif, multiple scholars, and an audience discussion.

From MIT to Tuskegee — then and now

At the event, Nicholas de Monchaux, head of MIT’s Department of Architecture, noted that MIT and Tuskegee University are launching a new program in which researchers and students from each institution will visit the other campus in early 2023, to learn more about areas of expertise at each school.

“We are prototyping what we hope will be a long-lasting institution,” de Monchaux said. “This is a family relationship.”

In this way, MIT and Tuskegee are following in the path of Taylor himself, whose life connects the two institutions.

Taylor was a groundbreaking figure who, after graduating from MIT, was recruited to become chief architect at the Tuskegee Institute by Booker T. Washington, Tuskegee’s leader. Taylor designed or co-designed at least 48 Tuskegee buildings.

Before attending MIT, Taylor, who was born in 1868, learned building techniques from his father, Henry Taylor, a carpenter who was the son of a white slave owner and a Black mother. Henry Taylor was allowed to go into business for himself, and settled in Wilmington, North Carolina, around 1850. Robert Taylor attended the Williston School in Wilmington, founded in 1866 for freed slaves. Then he worked in the family business before being accepted to MIT, which had the nation’s first architecture program.

Taylor’s hands-on building knowledge mattered at Tuskegee, where construction of his designs was performed by students and other community members. Taylor worked at Tuskegee until retiring in 1932; he died in 1942.

Friday’s event included remarks about Taylor’s work and legacy by Kwesi Daniels, professor and head of the Department of Architecture at Tuskegee University, and by Mark Jarzombek, professor of the history and theory of architecture at MIT.

Daniels noted that in the early 1890s, Tuskegee had just four small buildings. About 15 years later, thanks to Taylor’s efforts (and Washington’s ability to attract benefactors), it featured dozens of impressive brick structures. Andrew Carnegie thought Tuskegee’s Taylor-designed Carnegie Library, an elegant brick structure with four Ionic columns, was one of the five most impressive buildings bearing his name anywhere. (Carnegie helped support the construction of over 2,000 libraries.)

“Think about the significance of that,” Daniels said, “because we’re talking about bricks that were made by students, an entire building put together by students, and these are African American students in a period where the idea of Black people educating Black people to do this quality of work was not even fathomable,” at least to many outsiders.

“There is a select group of architects who can claim to have shaped an institution literally from the ground up,” Jarzombek said, placing Taylor in the company of campus designers at MIT, Rice University, and the University of Chicago.

At the same time, Jarzombek emphasized, Washington’s interest in recruiting Taylor likely stemmed in part from Taylor’s construction know-how, which Black people often faced barriers to acquiring — and still do. Thinking broadly about Taylor’s legacy, Jarzombek suggested, also means examining how certain aspects of the construction business, even seemingly progressive elements such as licensing and unions, have in practice been used to limit opportunities for Blacks over time.

Jarrett spoke to the audience in conversation with Holly Harriel MCP ’03, who earned her undergraduate degree from Tuskegee in 1996 and is a lecturer in MIT’s Department of Urban Studies and Planning as well as a strategic advisor to the MIT CoLab. Harriel asked Jarrett what advice she had for MIT students.

“Throughout my life, any time I get nervous, and I often do when faced with a new challenge, I think to myself, ‘Well, if he [Robert Taylor] could do that, you can do anything,’ and I think that’s what I would say to students,” Jarrett said.

She added: “If he could do that, just imagine what you could do with a little hard work and perseverance and resilience. I’m sure he had enormous adversity in his life, and no one in our family really told that story. They talk about the perseverance, and creative genius. And what he did with his life, and how he chose to spend his life. So, lead a purposeful life.”

Friday’s event was Jarrett’s second major appearance at MIT. In 2014, she delivered one of MIT’s Compton Lectures — the Institute’s most prestigious speaking series —emphasizing that giving all Americans comprehensive access to education was necessary to achieve “the full force of our economic capacity.”

In introductory remarks, Reif described first meeting Jarrett during a White House event in 2012 — and recounted how he received an email in 2021 from Jarrett, telling him about the diploma discovery, which her first cousins once removed made while organizing family materials.

“I nearly jumped out of my seat,” Reif told the audience on Friday. “Valerie and her family had put their hands on a piece of MIT history.” He added: “We are ecstatic to have a chance to share this moment with them.”

Noting the delicate restoration work the diploma has undergone in the last year, Jarrett quipped: “I’m glad we didn’t try to do it ourselves.”

Williston, through the decades

Friday’s event also featured taped video remarks by Phillip Clay, an MIT emeritus professor of urban studies who served as the Institute’s chancellor from 2001 through 2011. As a high school student, Clay graduated from the same Williston School in Wilmington from which Taylor graduated about 80 years earlier.

One common thread linking their experiences, Clay said, was the emphasis Black families placed on obtaining education whenever they could.

“The point to make here is that parents recognized the importance of quality education and insisted on it for a very long period of time,” Clay said.

Such opportunities were scarce: Clay said the Williston School was one of a dozen or so outstanding schools that Blacks could attend in North Carolina during his student days — in the state’s roughly 100 counties. Still, Clay notes, “for a few schools, there was every intent made to pour the resources into the school that made it possible for a fraction of the students to get the best education possible, and for our talents to be recognized. For that I am grateful.” At the same time, Clay noted about other families, “I’m sad that so much talent was left on the table for 150 years.”

In a similar vein, Jarrett emphasized that, from talking to her parents and grandparents, she learned how much Taylor made a “priority of education. And that was something he instilled in his children, who in turn instilled it in their children, and we tried to instill it in our children.”

Speaking of her grandfather, Robert Rochon Taylor — a son of Robert Robinson Taylor — Jarrett said that his outlook on life was similarly shaped by his father’s ethos.

“You have to go forth and you have to work really hard,” Jarrett said. “And the sky is the limit. And I think part of our [family] core values is that you can’t look at what you can’t do. You have to just keep pushing the envelope, and doing what you can do. And do it with integrity, and grace, and good humor. And those are the kinds of core values he got from his father, and passed on down to our family.”