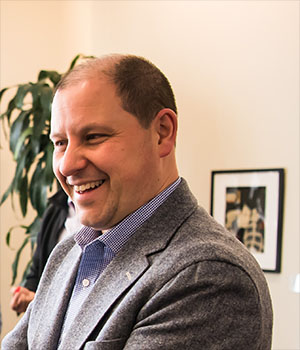 Professor Zuckerman Sivan is dedicated to helping students find spaces to “play with ideas for their own sake, for the love of knowledge.” As he notes, this will result in better work – “and you will be happier too.”

Ezra Zuckerman Sivan is the Deputy Dean of the Sloan School of Management as well as the Alvin J. Siteman Professor of Strategy and Entrepreneurship at Sloan. Zuckerman Sivan is an economic sociologist whose research focuses on showing how an understanding of fundamental social processes is important for shedding light on key issues in business and management, as well as how an appreciation for the dynamics of business and management inform our understanding of fundamental social processes. His research explores how authenticity, value, and identity are employed, as well as financial and labor markets, social networks, and classification. Zuckerman Sivan earned his Ph.D. in sociology from the University of Chicago.

Familiar with many of the tribulations of graduate school, Zuckerman Sivan credits his own allies and role models with helping him advocate for himself in these moments. In one instance, he confronted a professor over potential ethical misconduct, using an idea of his and a coauthor’s without attribution. Zuckerman Sivan describes the support of his wife, coathor, and late father in this encounter, both in helping him practice how to engage with the professor and in tempering his expectations about academic ethics. Additionally, he found it essential that he had “establish[ed] a reputation for [him]self with other faculty so that [he] was not so dependent on any one person.” Developing such ties can be pivotal in having as smooth a graduate experience as possible.

Zuckerman Sivan actively promotes balance both for his students and himself. As the son of a faculty member who made sure to spend time where he was “visibly not working,” albeit “always engaged in the life of the mind,” Zuckerman Sivan continues this tradition.

Observing Judaism with his family is important to Zuckerman Sivan. He holds the Sabbath and holidays sacred, in lieu of attending work events. Zuckerman Sivan says, “I hope the fact that I do this and am doing fine professionally nonetheless sends a signal that while our work is important, there are more important things and we need… balance.”

Zuckerman Sivan’s students appreciate his advocacy for prioritizing wellbeing. Writes one of his student nominators, “It was my first moment at MIT, away from home, that I heard somebody… caring about my life.” Supporting students in holding work and life in perspective is a Mentoring Guidepost identified by the Committed to Caring (C2C) program.

Zuckerman Sivan’s advising focuses on the whole student. One student nominator recalls Zuckerman Sivan swiftly providing support upon learning of a health condition: “He called me right away, asked about my [condition], and told me that it is not surprising that I get tremendous stress from my status, sincerely [insisting] that my health should be prioritized over everything.” Checking in with students proactively is a C2C Mentoring Guidepost.

Zuckerman Sivan also holds a generous perspective in evaluating student work. “One of my mantras is that students should always be judged by their best work,” writes Zuckerman Sivan.

Students are grateful for Zuckerman Sivan’s commitment to building their strengths as well as focusing on the development and practice of skills. Most of all, writes one student nominator, “I see [Zuckerman Sivan’s] belief… that I can make it in the end and he would keep teaching and encouraging me until [that] day.”

Zuckerman Sivan views graduate school as an equilibrium, where skewing too far in one direction is harmful. “One failure mode,” he notes, “is when students don’t get trained to think about questions in a more productive way and to acquire disciplined tools for attacking these questions… But the other failure mode is that they become too professionalized and focus only on what is trendy… The work can become soulless.”