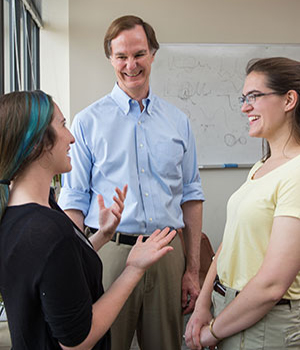 Ed Bertschinger is a student advocate who truly cares. During his appointment as Physics Department Head, he worked tirelessly to increase diversity and build an environment of respect and support. Ed was active in helping to increase the number of students from underrepresented minorities who received Physics PhDs from 0% in 2007 to 11% in 2012. He has also been active in organizing events such as the Institute Diversity Summit to provide a space to talk about the tension at MIT around diversity and excellence, believing that this tension detracts from the excellence MIT can achieve.

Ed has been an active supporter of Women’s groups on campus, seeking advice from the MIT Graduate Women in Physics group to learn how he could make a more caring culture in that department during his tenure as Head. He also organized the 2011 event Leaders in Science and Engineering: The Women of MIT to celebrate women’s achievements in science. The graduate women describe their interactions with Ed at these events as “meaningful…talking about good mentoring practices and what it means to study physics.” As another of his many contributions, Ed blogs for Women in Astronomy – his last blog post was titled, “Why gender equity is everyone’s business.”

One might wonder why Ed is such a self-proclaimed “diversity geek.” Ed’s own experiences have taught him that opportunity is everything. He grew up as the only white family in a Hispanic neighborhood that suffered from gang violence. His desire to escape the barrio and make a better life propelled him to pursue higher education and study science. Ed was the first in his family to graduate from college and received his BS in Physics in 1979 from Caltech, followed by his PhD in astrophysics from Princeton in 1984.

As a theoretical astrophysicist, his work focuses on cosmology, gravitation, and relativistic astrophysics. As a member of the MIT Kavli Institute for Astrophysics and Space Research, he leads a research program studying dark energy and dark matter. He and his research students (from high school to postdoctoral) investigate the formation of cosmic structure after the big bang, the physics of dark matter both in the early universe and in forming galaxies, the physics of gravitation in general relativity and alternative theories, and the physical processes governing matter and radiation close to black holes. His group uses a combination of analytical, computational, and statistical methods.

Ed values diversity, and he values each and every student for the unique perspective they bring. Ed speaks openly about his struggles in school and his moments of self-doubt. His candid nature has a real impact on students. One student describes, “Through sharing [our] stories, Ed found ways to help,” such as providing copies of his favorite books on the ‘nuts and bolts’ of working smart after listening to student concerns on the topic.  He seeks to move away from the ‘sink or swim’ mentality and believes that proper mentoring is the way to success. Many of his mentees have become leading faculty at top universities. Ed states, “Mentoring these women and men has been the most important and satisfying part of my work as a physicist.”

Ed “has made MIT a more positive and welcoming place” for anyone to succeed.