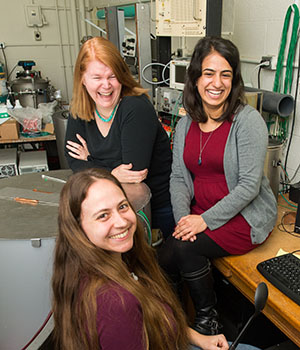 Janet Conrad stands out among MIT Physics professors, not only as a woman in a largely male dominated field, but also because she makes teaching the general public about the wonders of physics a top priority. Her résumé of outreach events is truly exceptional. Janet’s ability to stimulate enthusiasm in everyone around her, from high school students to postdocs to the public, stems from her deep love for the subject. Janet explains, “I think it is fun, and I want everyone else to think it is fun too.”

Janet is a role model for young girls and women interested in science. She studies neutrinos, the lightest known matter particle. In fact, her experiments have shown that these elusive particles actually do have mass, disproving the theory of particle physics called The Standard Model. Janet is now working to see if neutrinos have any other unexpected “features” which has led to the building of the MicroBooNE, a state-of-the-art liquid Argon time projection chamber, which can measure particle tracks with bubble-chamber-like resolution. In addition, she is searching for astrophysical neutrinos deep in the Antarctic ice of the South Pole and developing high power cyclotrons to improve neutrino sources for future studies. Her extensive publication record serves to highlight the immense success she has had in the field of particle physics. Janet is pushing the boundaries on the rules of particle physics and redefining the space for women in science. She has received numerous awards in recognition her work, including the prestigious Guggenheim fellowship and Columbia Distinguished Faculty Fellow.

Janet Conrad joined the MIT faculty in 2008, and has been making her influence on the MIT community felt ever since. Janet fosters a safe and inclusive environment for students, going “above and beyond to make women feel welcomed and at home” in the challenging environment of the physics department. The impact of her mentoring extends to individuals beyond her lab. Janet makes students feel special and valued. One such student explains, “we have discussions about research that make me feel that she values my insight and intelligence.” Janet is involved in department operations to help the Physics Department be a more functional and less stressful place. The success of Janet’s mentoring can be observed in the number of her mentees who go on to pursue higher-level degrees in science and the many who go on to become faculty themselves.

Janet Conrad is a voice for women, for science, and for MIT. We are lucky to have her strong yet caring nature shaping our scientists of the future.