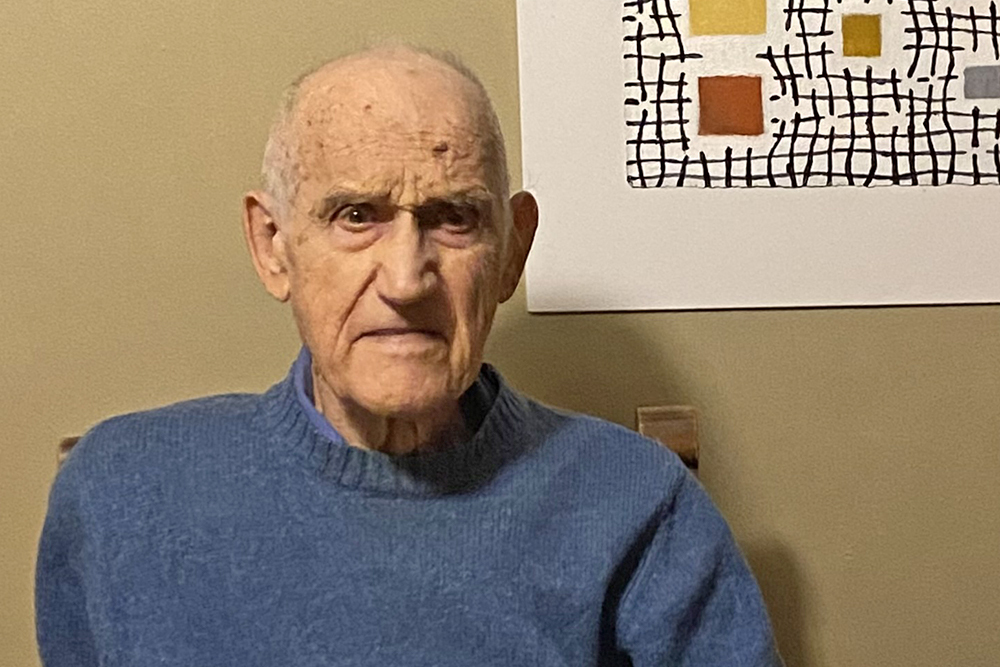 Robert W. Balluffi, professor emeritus in the MIT Department of Materials Science and Engineering (DMSE), died Dec. 8 at his home in Ithaca, New York. He was 98 years old.

Described by colleagues as the last of an era of materials scientists with a holistic understanding of the field, Balluffi was renowned for both his expertise and publications in a broad range of topics, including crystal defects, solid-state diffusion, and crystalline interfaces.

“He represents a way of thinking about materials in general, in all aspects, that is disappearing over time,” says DMSE’s W. Craig Carter, the Toyota Professor of Materials Processing, who was a colleague of Balluffi’s. A modern trend toward specialization in materials science is one reason. “Also, the metrics by which we succeed no longer foster somebody who has a very catholic view of the discipline. Bob was the last of a group of people who knew about the entire field, rather than newer generations who know very deeply a fraction of the field.”

Born in Bayshore, on New York’s Long Island, in 1924, Balluffi grew up on the East Side of Manhattan, where his father worked as a social worker, serving first-generation European immigrants. Balluffi’s parents, neither of whom had any advanced formal education, encouraged him to apply to MIT. Though he initially had “no strong convictions about this myself,” Balluffi wrote in an autobiography in Journal of Physics and Chemistry of Solids in 1994, a dedication issue marking his 70th birthday, he applied and was admitted into the Class of 1945.

During his sophomore year at MIT, when Balluffi started majoring in metallurgy, the United States had entered World War II. He was drafted by the Army and served as a foot soldier in Germany during the Battle of the Bulge and the crossing of the Rhine, key turning points for the Allied forces. He was awarded a Bronze Star for heroic service, which Balluffi described as “doing what had to be done under the appalling circumstances that prevailed.”

Balluffi came back to the U.S. in 1946 and, under the GI Bill, resumed his studies at MIT at an accelerated pace, earning a bachelor’s degree in metallurgy the next year. Financial support from the government and a research assistantship allowed him to stay on at MIT to do graduate work. Under the auspices of his advisor Professor Morris Cohen, he started his thesis work on the behavior of carbides during chromium-steel tempering, igniting what would become a lifelong passion for research.

After earning a PhD in 1950, Balluffi secured a position at the government-funded research lab of Sylvania Electric Products in Bayside, Long Island. There he conducted early studies involving the Kirkendall effect, which helped explain issues in solid-state diffusion, an important process in materials development.

In 1954, Balluffi entered academia, becoming an assistant professor in the Department of Mining, Metallurgy, and Petroleum Engineering at the University of Illinois at Urbana-Champaign. He began his studies in, among other topics, crystal defects, or imperfections in the arrangement of atoms in a solid. Defects control a lot of the properties of materials, such as electrical conductivity in metals.

He left Illinois in 1964 and spent the turbulent late ’60s at Cornell University, where Balluffi established a research program on radiation damage, the degrading effect radiation can have on materials, and did extensive studies into grain boundaries, key to developing new metal alloys.

In 1978, after a divorce and a remarriage, Balluffi returned to MIT as professor of metallurgy. He found a more crowded campus than he left 28 years before, “with far fewer open vistas and a startling increase in the number of automobiles squeezed into every conceivable space.”

Balluffi also found at MIT that his reputation as an experimental scientist preceded him. Samuel Allen SM ’71, PhD ’75, now DMSE’s POSCO Professor Emeritus of Physical Metallurgy, knew much about his work in crystal defects and other areas. He held one paper Balluffi co-authored in particular esteem, “Measurements of Equilibrium Vacancy Concentrations in Aluminum,” published in Physical Review in 1960.

“It was the first paper that definitively proved that vacancies exist in thermal equilibrium,” says Allen, referring to a type of crystal defect. “It was a great thing to use in teaching because of the importance of the results and the elegance of the experiment.”

Allen and Balluffi, their offices in DMSE being close, themselves became close. “He was an important mentor figure to me,” Allen says. He sat in on a popular graduate class Balluffi taught, 3.33 (Defects in Materials). “When I was a junior faculty member, I would sit in on some of my colleagues’ classes, and that was one that I learned a great deal from.”

The two later taught a class together, 3.21 (Kinetics Processes in Materials), a collaboration that led to a new graduate-level textbook laying out the building blocks of a materials science education. They invited Craig Carter to help in its writing, a five-year long project that culminated in “Kinetics of Materials,” published in 2005.

Merton Flemings, head of DMSE from 1982 to 1994 and Toyota Professor Emeritus, calls the work a “tour de force and a major contribution to materials science.”

Carter says working on the project gave him a new appreciation for Balluffi: “I came away with a greater realization of his kindness and thoughtfulness toward making a book that would help students learn.”

Balluffi has two other materials science books, “Introduction to Elasticity Theory for Crystal Defects” and “Interfaces in Crystalline Materials.” The latter he co-wrote with Oxford University professor of materials science Adrian Sutton.

“Everybody in the field should have a copy of Sutton and Balluffi on their bookshelf,” Carter says.

Balluffi was a fellow of the American Physical Society and the American Academy of Arts and Sciences and a member of the National Academy of Sciences. He was on the DMSE faculty until he retired in 1996. In 2004, he moved to Ithaca to be closer to his family.

His preeminence as a scholar and researcher aside, Balluffi had other talents. As a young man, he played jazz trumpet, emulating Louis Armstrong — “I never became fluent in the high register above high C,” he wrote in his autobiography — and immersed himself in sports.

He was also a talented watercolor artist, Allen says. He painted scenes around Boston and near his home in Brookline, where a light-rail line brought the Green Line trolley out of a tunnel, a classic Boston-area cityscape. “He had one picture I really remember,” Allen says, “a Green Line train coming out of that tunnel with the CITGO sign in the background.”

Today, a Balluffi original hangs in DMSE’s offices in Cambridge — a portrait of his thesis advisor Morris Cohen.

Balluffi is survived by his children, Andrew, Barbara, and Frank, and stepchildren, Stephen, Gail, and Robert.