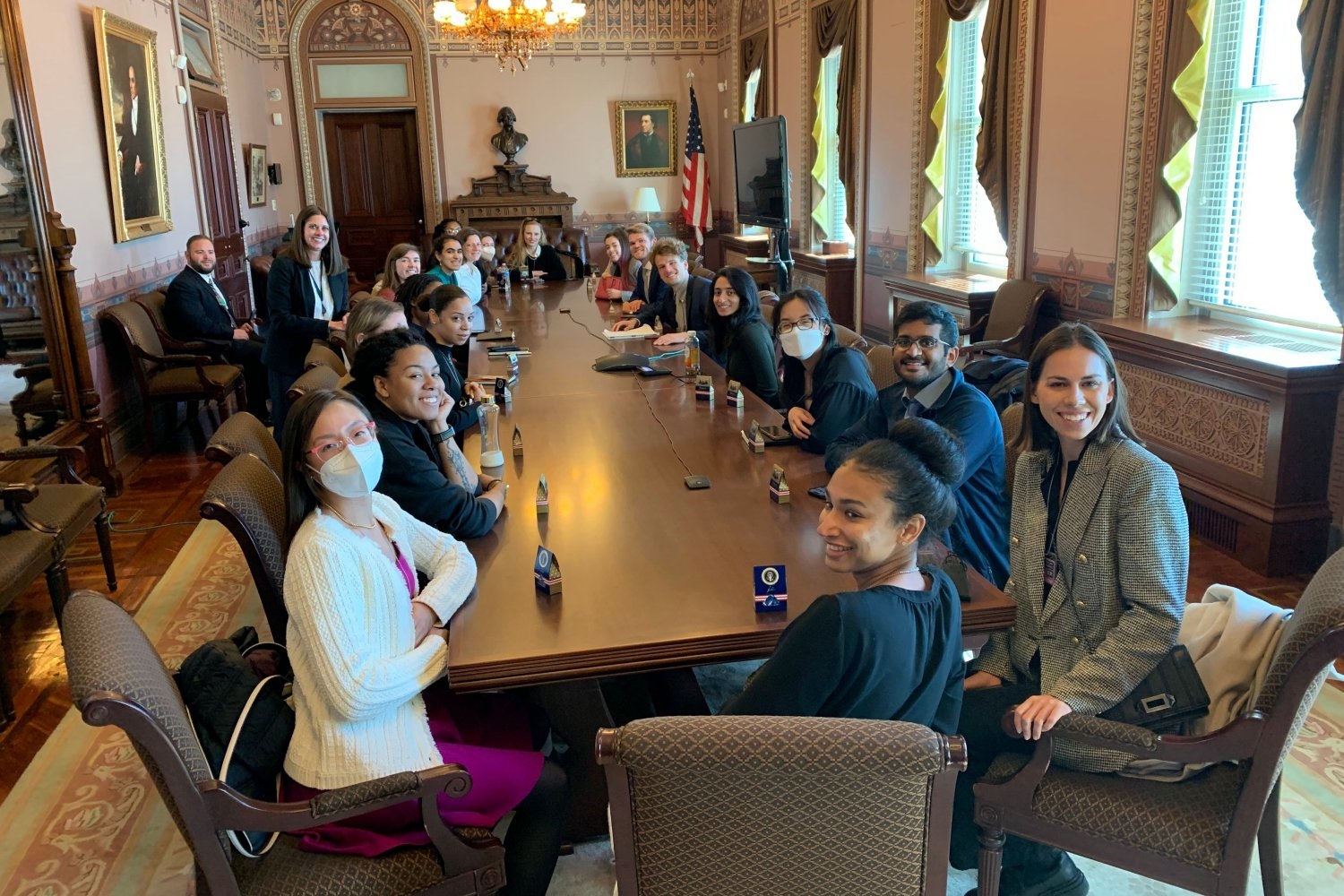 On Oct. 16 and 17, 14 MIT graduate students and one postdoc, joined by five students from the University of the District of Columbia, traveled to Washington to speak to representatives from several federal executive agencies. The trip served as an opportunity for participants to discuss issues related to science and technology policy and the role the federal government plays in addressing these issues.

The group of participants met with seven federal agencies: the National Science Foundation, Environmental Protection Agency, White House Office of Science and Technology Policy, National Aeronautics and Space Administration, Department of Transportation, U.S. Digital Service, and Federal Trade Commission. The group also met with the MIT Washington Office. This venture was part of MIT’s Science Policy Initiative’s (SPI) 12th annual Executive Visit Days (ExVD). SPI is a group of students and postdocs that works with the MIT DC office to connect the MIT community to the world of science policy.

ExVD serves three main purposes. First, it grants participants an insider perspective on how federal agencies work, the challenges they face, and how they can enact change. Second, representatives from each agency, many of whom are MIT alumni, discuss their paths toward careers in science policy, including their motivations for pursuing such careers and the steps they needed to take to transition from academic research to science policy. Lastly, ExVD serves as an opportunity for participants to network with students, postdocs, and professionals outside of their fields but united by common interests in science policy.

“I chose to organize ExVD because I am considering a career in policy after finishing my PhD, and I wanted the opportunity to get an inside view on how each of these federal agencies operate,” says Serena Booth, a PhD student in the Department of Electrical Engineering and Computer Science, who serves on SPI’s executive board and organized the 2022 ExVD. “I’m passionate about science policy, and I believe we need many, many more scientists working for the federal government — so I hoped some of my peers would equally walk away with this same intention of working in policy after the visit days.”

For each meeting, representatives from the federal agencies began by introducing their agency, followed by a Q&A discussion with MIT and UDC students and postdocs. Participants had no shortage of questions; discussions would often outlast meeting times and extend into hallways as the participants were escorted to their next meeting. The diversity in questions was representative of the diversity in the participants. Some students asked about the scientific research conducted at each agency. Other students asked questions about the history of each agency, or how the agency adapts to changing presidential administrations. Furthermore, participants were able to ask direct questions about policy initiatives recently enacted, allowing them to learn how those initiatives were brought to fruition.

In addition to being able to ask a wide array of questions, participants also met with some prominent individuals in the field of science policy. One highlight was the meeting with the U.S. Digital Service, where the delegation met with Megan Smith, an MIT alumna and former chief technology officer of the United States under President Barack Obama. This meeting was held in the Eisenhower Executive Office Building, which resides on White House grounds directly next to the West Wing of the White House. Through this meeting and other engagements, ExVD allowed participants to become inspired and aware of the possible impact they can have through a career in science policy.