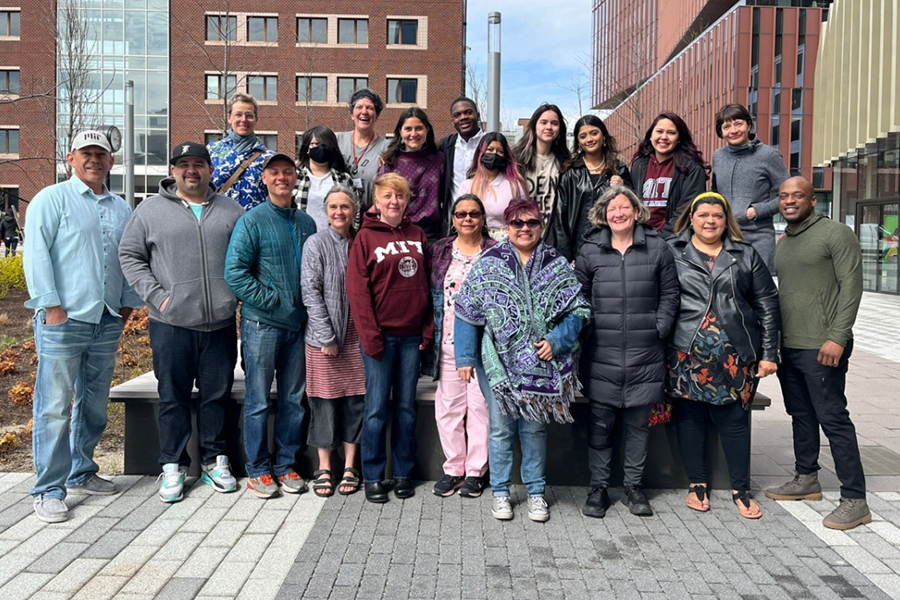 Natural world philosophies are a source of solutions.

The sun shone bright and warm on the Dertouzos Amphitheater at the Stata Center this past Earth Day as a panel of Indigenous leaders from across the country talked about their experiences with climate activism and shared their natural world philosophies — a worldview that sees humanity as one with the rest of the Earth.

“I was taught the natural world philosophies by those raised by precolonial individuals,” said Jay Julius W’tot Lhem of the Lummi tribe of the Pacific Northwest and founder and president of Se’Si’Le, an organization dedicated to reintroducing Indigenous spiritual law into the mainstream conversation about climate. Since his great-grandmother was born in 1888, he grew up “one hug away from pre-contact,” as he put it.

Natural world philosophies sit at the center of the Indigenous activism taking place all over the country, and they were a highlight of the Indigenous Earth Day panel — one part of a two-day symposium called Living Climate Futures. The events were hosted by the Anthropology and History sections and the Program on Science, Technology, and Society in MIT’s School of Humanities, Arts, and Social Sciences (SHASS), in collaboration with the MIT Office of Sustainability and Project Indigenous MIT.

“The Living Climate Futures initiative began from the recognition that the people who are living most closely with climate and environmental struggles and injustices are especially equipped to lead the way toward other ways of living in the world,” says Briana Meier, ACLS Emerging Voices Postdoctoral Fellow in Anthropology and an organizer of the event. “While much climate action is based in technology-driven policy, we recognize that solutions to climate change are often embedded within and produced in response to existing social systems of injustice and inequity.”

On-the-ground experts from around the country spoke in a series of panels and discussions over the two days, sharing their stories and inspiring attendees to think differently about how to address the environmental crisis.

The hope, according to faculty organizers, was that an event centered on such voices could create connections among activists and open the eyes of many to the human element of climate solutions.

Over the years, many such solutions have overlooked the needs of the communities they are designed to help. Streams in the Pacific Northwest, for example, have been dammed to generate hydroelectric power — promoted as a green alternative to fossil fuel. But these same locations have long been sacred spots for Indigenous swimming rituals, said Ryan Emanuel (Lumbee), associate professor of hydrology at Duke University and a panelist in the Indigenous Earth Day event. Mitigating the environmental damage does not make up for the loss of sacred connection, he emphasized.

To dig into such nuances, the organizers invited an intergenerational group of panelists to share successes with attendees.

In one panel, for example, urban farmers from Mansfield, Ohio, and Chelsea, Massachusetts, discussed the benefits of growing vegetables in cities.

“Transforming urban spaces into farms provides not just healthy food, but a visible symbol of hope, a way for people to connect and grow food that reflects their cultures and homes, an economic development opportunity, and even a safe space for teens to hang out,” said Susy Jones, senior sustainability project manager in the MIT Office of Sustainability and an event organizer. “We also heard about the challenges — like the cost of real estate in Massachusetts.”

Another panel highlighted the determined efforts of a group of students from George Washington High School in Southeast Chicago to derail a project to build a scrap metal recycling plant across the street from their school. “We’re at school eight hours a day,” said Gregory Miller, a junior at the school. “We refuse to live next door to a metals scrapyard.”

The proposed plant was intended to replace something similar that had been shut down in a predominantly white neighborhood due to its many environmental violations. Southeast Chicago is more culturally diverse and has long suffered from industrial pollution and economic hardship, but the students fought the effort to further pollute their home — and won.

“It was hard, the campaign,” said Destiny Vasquez. “But it was beautiful because the community came together. There is unity in our struggle.”

Unity was also at the forefront of the discussion for the Indigenous Earth Day panel in the Stata Amphitheater. This portion of the Living Climate Futures event began with a greeting in the Navajo language from Alvin Harvey, PhD candidate in aeronautics and astronautics (Aero/Astro) and representative of the MIT American Indian Science and Engineering Society and the MIT Native American Student Association. The greeting identified all who came to the event as relatives.

“Look at the relatives next to you, especially those trees,” he said, gesturing to the budding branches around the amphitheater. “They give you shelter, love … few other beings are willing to do that.”

According to Julius, such reverence for nature is part of the Indigenous way of life, common across tribal backgrounds — and something all of humanity once had in common. “Somewhere along the line we all had Indigenous philosophies,” he said. “We all need an invitation back to that to understand we’re all part of the whole.”

Understanding the oneness of all living things on earth helps people of Indigenous nations feel the distress of the earth when it is under attack, speakers said. Donna Chavis, senior climate campaigner for Friends of the Earth and an elder of the Lumbee tribe, discussed the trauma of having forests near her home in the southeastern United States clear-cut to provide wood chips to Europe.

“They are devastating the lungs of the earth in North Carolina at a rate faster than in the Amazon,” she said. “You can almost hear the pain of the forest.”

“People are experiencing a climate crisis that is global in really different ways in different places,” says Heather Paxson, head of MIT Anthropology and an event organizer. “What came out of these two days is a real, palpable sense of the power of listening to individual experience. Not because it gives us the big picture, but because it gives us the small picture.”

Trinity Colón, one of the leaders of the group from George Washington High School, impressed on attendees that environmental justice is much more than an academic pursuit. “We’re not talking about climate change in the sense of statistics, infographics,” she said. “For us this is everyday life … [Future engineers and others training at MIT] should definitely take that into perspective, that these are real people really being affected by these injustices.”

That call to action has already been felt by many at MIT.

“I’ve been hearing from grad students lately, in engineering, saying, ‘I like thinking about these problems, but I don’t like where I’m being directed to use my intellectual capital, toward building more corporate wealth,’” said Kate Brown, professor of STS and an event organizer. “As an institution, we could move toward working not for, not to correct, but working with communities.”

The world is what we’ve got

MIT senior Abdulazeez Mohammed Salim, an Aero/Astro major, says he was inspired by these conversations to get involved in urban farming initiatives in Baltimore, Maryland, where he plans to move after graduation.

“We have a responsibility as part of the world around us, not as external observers, not as people removed and displaced from the world. And the world is not an experiment or a lab,” he says. “It’s what we’ve got. It’s who we are. It’s all that we’ve been and all we will be. That stuck with me; it resonated very deeply.”

Salim also appreciated the reality check given by Bianca Bowman from GreenRoots Chelsea, who pointed out that success will not come quickly, and that sustained advocacy is critical.

“Real, valuable change will not happen overnight, will not happen by just getting together a critical mass of people who are upset and concerned,” he said. “Because what we’re dealing with are large, interconnected, messy systems that will try to fight back and survive regardless of how we force them to adapt. And so, long term is really the only way forward. That’s the way we need to think of these struggles.”