First Impressions of the USA

A Primer for Understanding ‘Merica

First Impressions of the USA

Did he just call me Mrs. Lincoln?

Upon arrival I was greeted by the air hostess who apologetically told us that all our luggage had to be left behind in the airport at my home country (India) due to technical difficulties. A check-in bag, my wallet, and a phone without a network was all I had.

At the airport, while waiting to fill out the paperwork for my luggage, I met a well-dressed middle-aged man who started a conversation with me. After hearing about my situation, he said, “Apart from that, Mrs. Lincoln, how was the play?”.

Wait what…? I looked around to see if there was anyone standing next to me. Who is Mrs. Lincoln and why is he calling me that? Is he weird or just pulling my leg? This was my first encounter with an American figure of speech.

I decided to just go along with it and laugh with him because I needed to make a phone call to a friend. The man was kind enough to let me make a phone call and also gave me his phone number if I ever needed it. Luckily, I had signed up for a pickup from the airport, which my college offered for new students. I had a moment of relief when I was able to find the student who was there to collect me.

Once I was done with the airline’s paperwork, they assured me they would send the baggage to my address as soon as possible, free of charge. For some reason that didn’t comfort me. Anyways, after my first — and confusing — experience at the airport, it was time to step outside and see the USA!

Stepping on the US soil

It was around 10 a.m. on a workday in late August; the sky was clear, and the air was warm. The weather reminded me of the weather in India on a mild spring day. I imagined it was just another day and did not appreciate the warmth, but in retrospect (after being here for a few years), it was one of those days with perfect weather.

The first thing I noticed was roads and traffic outside the airport. All the cars were so different from what I was used to, clean and reflecting the sun like mirrors, zipping on the perfectly smooth roads. There was no stopping (of cars and people) whatsoever, no traffic jams and no surprises on the freeway.

Some things were fascinating: there was no honking, people drove with their windows closed, and there were not many people at all. I understood two concepts that I had not grasped until that point: lane driving and the difference between a developing and a developed country. In short, it was ‘perfect’. This was like stepping into the future, like The Jetsons, except that the cars did not fly (yet).

The college I was heading to was situated on a hill on the Hudson, right across midtown Manhattan. The view from the college was spectacular. To this day I will never forget the chills that the New York skyline gave me on my first day in the USA. It was an incredible feeling to realize — half of the famous people I knew, Times Square, Empire State building, World Trade Center and Wall street — all of that was on a strip of land less than a mile away across river.

Once I was dropped off at the college, a student whom I had met online was kind enough to show me around campus, after which we went to the bus station to head to my new home. He also paid for my bus fare, as I had only bills ranging from $20 to $100. I knew I needed some cash but forgot about the liquidity issue! I also learnt that people take the queue system seriously, unlike back home where you had to get elbowed to get on a bus.

At my new home, I met my roommates who were very warm and welcoming. They were kind enough to cook food for me for a few days. For the next couple of weeks, I mostly stayed indoors. While I was low on resources, it was the kindness of my new friends who made my stay comfortable.

The following week I went to visit New York City and Times Square with a friend. I was very excited:  this was my first visit to New York at night. The first thing I saw as soon as I came out of the subway station were the words “Believe” written on a huge marquee sign. This was a moment of epiphany; was New York trying to tell me something? 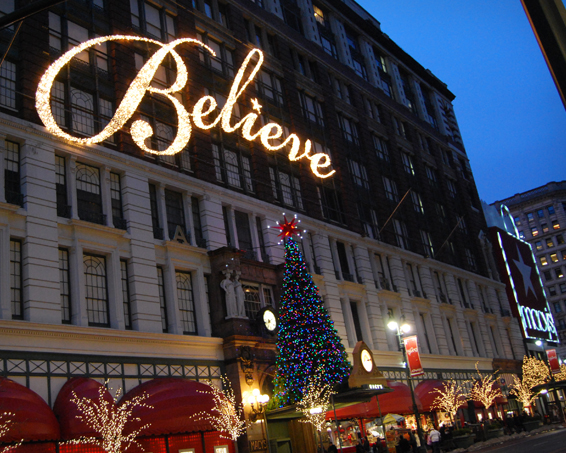 Here are some key takeaways from my experience. There are always people who are willing to help if you ask them (politely). I was fortunate to meet the right people at the right time just by talking to strangers. Don’t take everything literally, at least in the USA. There are a few expressions particular to the States, and I have yet to understand them all.  Lastly, college students are always helpful, as they can understand the struggle of being a new student and have probably been in your shoes once.

Oh yeah, and remember my luggage? After visiting some exotic locations, it arrived two and a half weeks later!