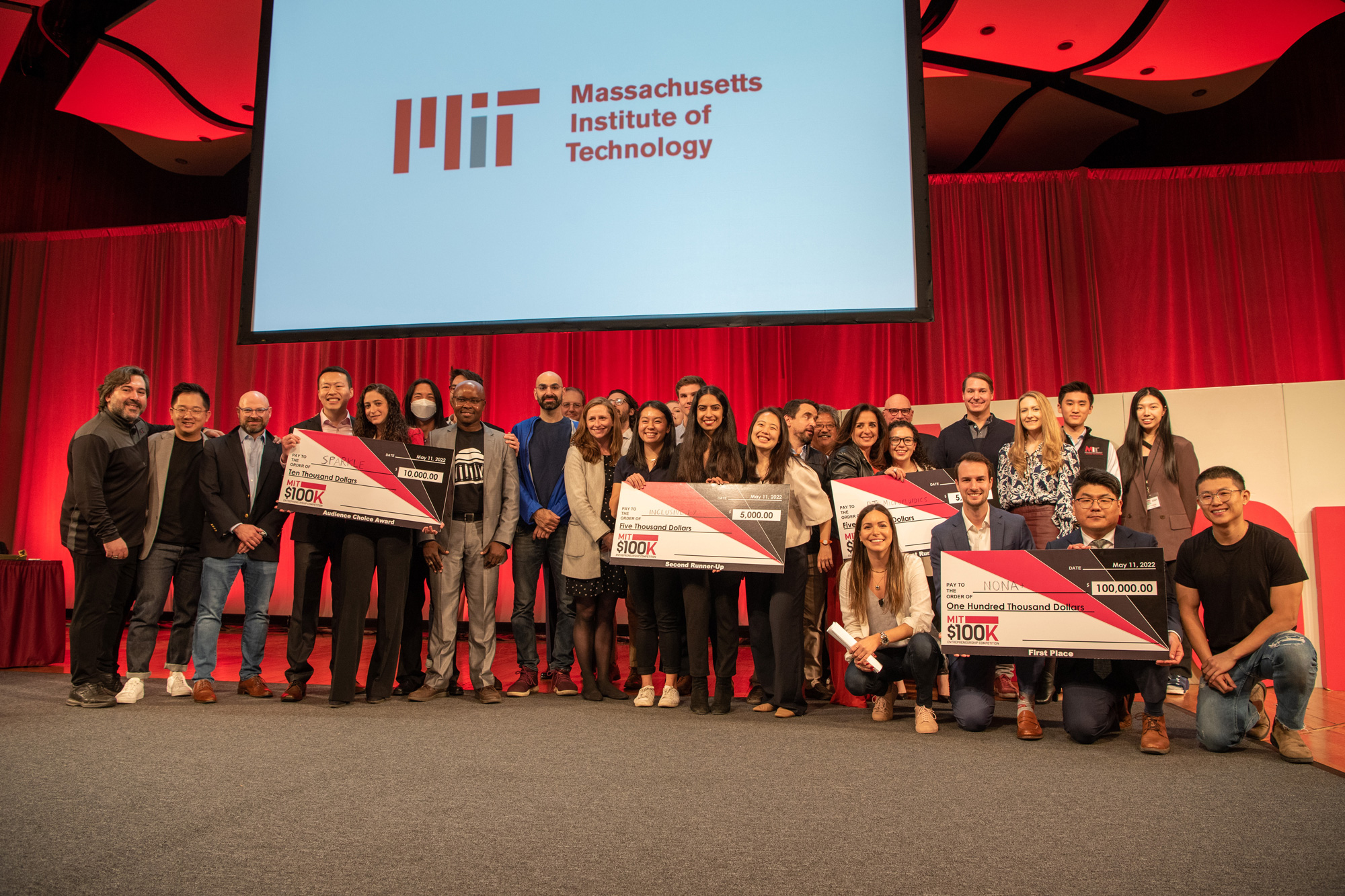 The winner of this year’s MIT $100K Entrepreneurship Competition is commercializing a new water desalination technology.

Nona Desalination says it has developed a device capable of producing enough drinking water for 10 people at half the cost and with 1/10th the power of other water desalination devices. The device is roughly the size and weight of a case of bottled water and is powered by a small solar panel.

“Our mission is to make portable desalination sustainable and easy,” said Nona CEO and MIT MBA candidate Bruce Crawford in the winning pitch, delivered to an audience in the Kresge Auditorium and online.

The traditional approach for water desalination relies on a power-intensive process called reverse osmosis. In contrast, Nona uses a technology developed in MIT’s Research Laboratory of Electronics that removes salt and bacteria from seawater using an electrical current.

“Because we can do all this at super low pressure, we don’t need the high-pressure pump [used in reverse osmosis], so we don’t need a lot of electricity,” says Crawford, who co-founded the company with MIT Research Scientist Junghyo Yoon. “Our device runs on less power than a cell phone charger.”

The founders cited problems like tropical storms, drought, and infrastructure crises like the one in Flint, Michigan, to underscore that clean water access is not just a problem in developing countries. In Houston, after Hurricane Harvey caused catastrophic flooding in 2017, some residents were advised not to drink their tap water for months.

The company has already developed a small prototype that produces clean drinking water. With its winnings, Nona will build more prototypes to give to early customers.

The company plans to sell its first units to sailors before moving into the emergency preparedness space in the U.S., which it estimates to be a $5 billion industry. From there, it hopes to scale globally to help with disaster relief. The technology could also possibly be used for hydrogen production, oil and gas separation, and more.

The MIT $100K is MIT’s largest entrepreneurship competition. It began in 1989 and is organized by students with support from the Martin Trust Center for MIT Entrepreneurship and the MIT Sloan School of Management. Each team must include at least one current MIT student.

The company uses conversational artificial intelligence and natural language processing to detect words and phrases that contain bias, and can measure the level of bias or inclusivity in communication.

“We’re here to create a world where everyone feels invited to the conversation,” said MBA candidate Yeti Khim, who co-founded the company with fellow MBA candidates Joyce Chen and Priya Bhasin.

Inclusive.ly can scan a range of communications and make suggestions for improvement. The algorithm can detect discrimination, microaggression, and condescension, and the founders say it analyzes language in a more nuanced way than tools like Grammarly.

Inclusive.ly plans to sell to organizations on a subscription model and notes that diversity and inclusion is becoming a higher priority in many companies. Khim cited studies showing that lack of inclusion hinders employee productivity, retention, and recruiting.

“We could all use a little bit of help to create the most inclusive version of ourselves,” Khim said.

The third-place prize went to RTMicrofluidics, which is building at-home tests for a range of diseases including strep throat, tuberculosis, and mononucleosis. The test is able to detect a host of bacterial and viral pathogens in saliva and provide accurate test results in less than 30 minutes.

The audience choice award went to Sparkle, which has developed a molecular dye technology that can illuminate tumors, making them easier to remove during surgery.

This year’s $100K event was the culmination of a process that began last March, when 60 teams applied for the program. Out of that pool, 20 semifinalists were given additional mentoring and support before eight finalists were selected to pitch.

The other finalist teams were:

Astrahl, which is developing high resolution and affordable X-ray systems by integrating nanotechnologies with scintillators;

Encreto Therapeutics, which is discovering medications to satiate appetite for people with obesity;

Iridence, which has patented a biomaterial to replace minerals like mica as a way to make the beauty industry more sustainable; and

Mantel, which is developing a liquid material for more efficient carbon removal that operates at high temperatures.