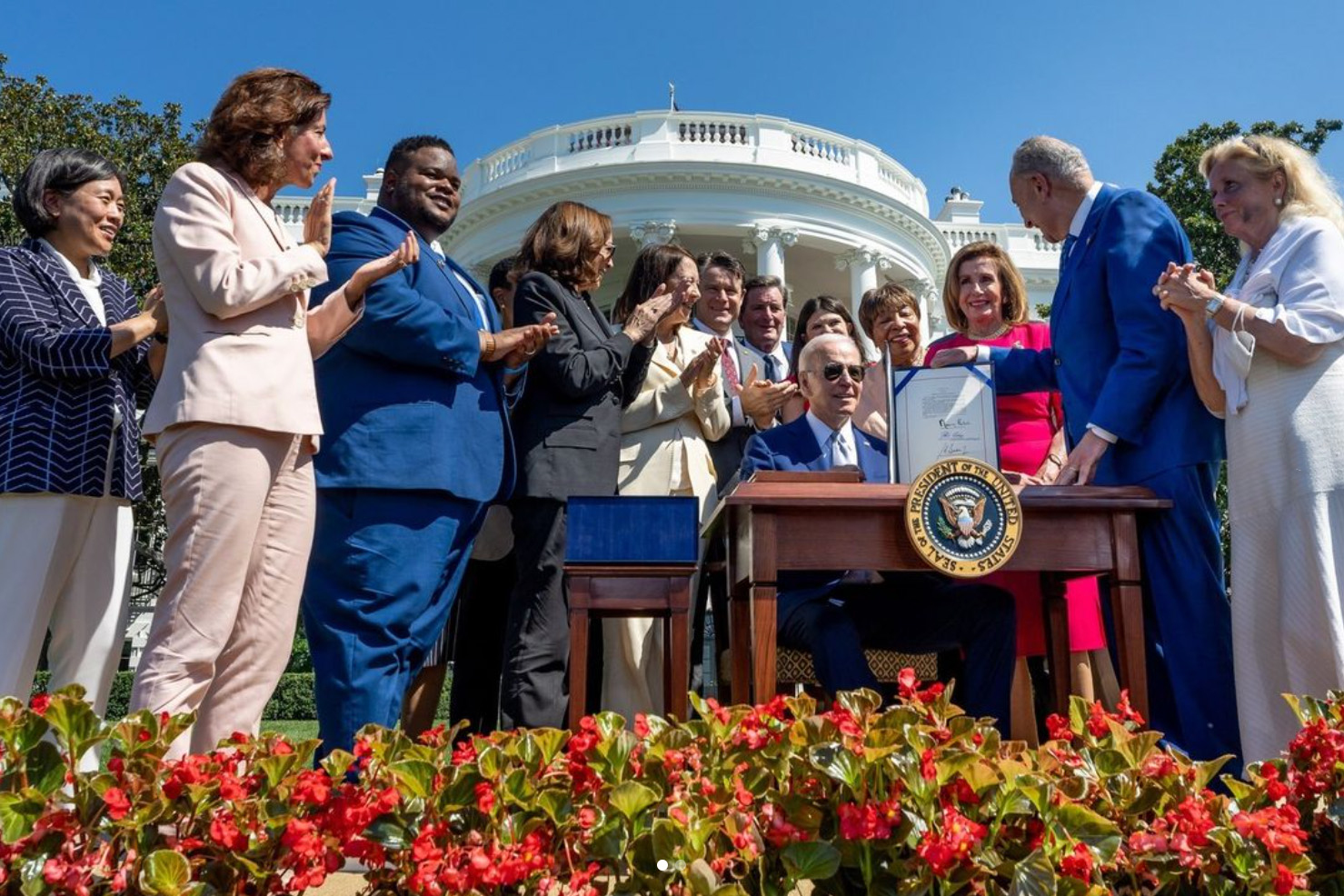 President L. Rafael Reif and Vice President for Research Maria Zuber were among those on hand Tuesday when President Biden signed the “CHIPS and Science” bill into law in an upbeat ceremony on the South Lawn of the White House. The act provides $52 billion in federal funding to advance the U.S. semiconductor industry through research, design, and manufacturing, and authorizes the doubling of the National Science Foundation and the creation of a new directorate at the agency.

President Reif also was part of a small group of tech leaders — mostly corporate CEOs — invited to meet with President Biden in the White House after the ceremony. Secretary of Commerce Gina Raimondo also attended that gathering, which included a Biden-led tour of the Oval Office.

Reif and Zuber were invited to the ceremony to acknowledge MIT’s work in support of the science portion of the bill, which began in late 2018. Reif’s ideas helped shape aspects of the bill, and he was a vocal advocate for it among both university and government officials. Zuber served on two important government advisory boards during the bill’s gestation and consideration — first on the National Science Board, which she had previously chaired, and now as co-chair of the President’s Council of Advisors on Science and Technology.

Also attending the ceremony from MIT were David Goldston, director of the MIT Washington Office, and Jonathan Gruber, the Ford Professor of Economics, who also helped shape aspects of the bill. “Jumpstarting America,” a book written by Gruber and Simon Johnson, the Ronald A. Kurtz Professor of Entrepreneurship at the MIT Sloan School of Management, caught the attention of policymakers involved with the bill.

One of the White House staff who worked on the bill was Elisabeth Reynolds, formerly executive director of MIT’s Industrial Performance Center and now with the White House National Economic Council.

The CHIPS part of the bill provides funding for new semiconductor manufacturing plants and for research and development and workforce training in microelectronics. The science portion of the bill authorizes major funding increases for the National Science Foundation and the Department of Energy, and establishes a new Technology, Innovation, Partnerships Directorate at NSF, a change President Reif has championed.

The White House celebrated the signing of the bill with fanfare. Hundreds attended the signing in the blazing heat, including leaders from industry, labor, and government, who mingled before the ceremony, as the Marine Band played in the background.

Prior to the actual bill signing, the crowd heard remarks from Senate Majority Leader Chuck Schumer, the principal Senate sponsor of the legislation; House Speaker Nancy Pelosi; Commerce Secretary Raimondo; Josh Aviv, an entrepreneur who has started a Buffalo-based company that provides mobile charging for electric vehicles; and then from President Biden.

All emphasized the forward-looking nature of the bill and the bipartisanship that enabled its passage.

Biden said the bill authorizes the fastest increase in research spending in 70 years, citing quantum computing, artificial intelligence, and biotechnology as fields that could benefit. He said the bill shows “we have met the moment” and recaptured the sense of possibility that defines the nation.

“The ‘CHIPS and Science Act’ is going to inspire a whole new generation of Americans to ask [the] question, ‘What’s next?’” Biden said.