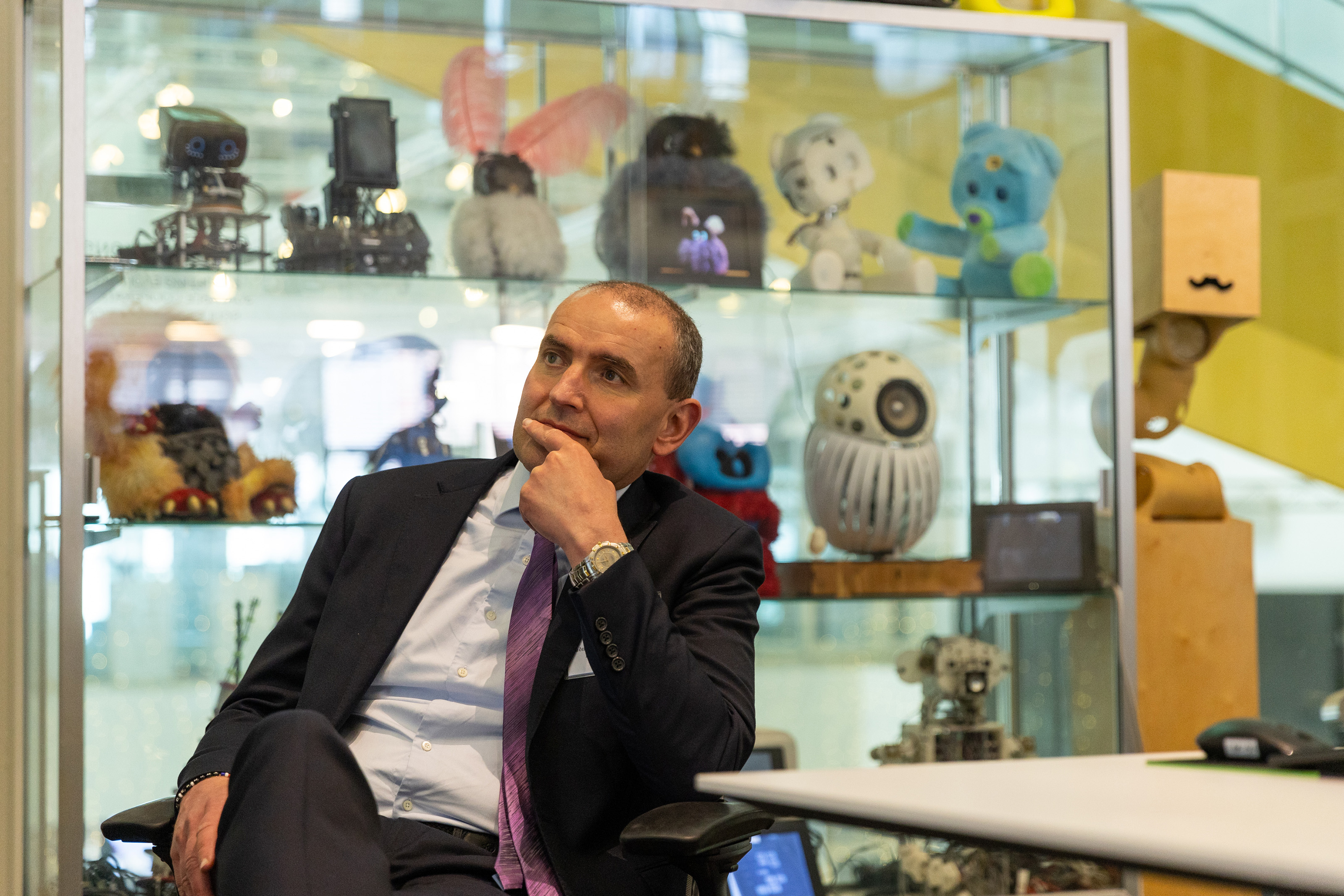 Delegation meets campus leaders, with an eye toward AI applications and the Icelandic language.

Guðni Thorlacius Jóhannesson, the president of Iceland, visited MIT on Friday, engaging in talks with several campus leaders and professors, and touring the Media Lab.

Jóhannesson visited the Institute along with a substantial delegation of officials and scholars from Iceland. They met with MIT scholars, who delivered a variety of presentations on research, design, and entrepreneurship; the Iceland delegation also had a particular interest in the inclusion of the Icelandic language in artificial intelligence-driven tools that automatically recognize, translate, and deploy speech and texts.

“We are determined to make sure that Icelandic has a place in the digital age,” Jóhannesson said. “AI plays a key role there.” In working to have Icelandic represented in machine-translation, voice-recognition, and associated language tools, he added: “We want to make sure it is in our interest, and to the benefit of mankind.”

In addition to the presentations, the delegation also met with Hashim Sarkis, dean of MIT’s School of Architecture and Planning (SA+P).

“It is important to put the human being front and center,” Sarkis said, describing the priorities of Media Lab researchers and MIT scholars and students.

Sarkis added that many researchers at the Media Lab, SA+P, and across the Institute have “a very deep interest in design, as [an] approach to solving problems in the world.”

The Icelandic delegation sat down for a series of discussions with MIT faculty and administrators. Krystyn Van Vliet, associate provost, associate vice president for research, and the Michael and Sonja Koerner Professor of Materials Science and Biological Engineering, discussed MIT’s research mission and the Kendall Square innovation ecosystem.

Daniela Rus, the Andrew and Erna Viterbi Professor of Electrical Engineering and Computer Science, director of the Computer Science and Artificial Intelligence Laboratory (CSAIL), and deputy dean of research for the MIT Schwarzman College of Computing, talked about CSAIL, the state of AI, and, in dialogue with the Iceland group, discussed the application of AI to language-recognition and translation tasks.

Kelly Gavin, manager of philanthropic relations at the Media Lab, gave the group a tour of the lab, which included a talk on natural language processing by Media Lab PhD student Pedro Colon-Hernandez; the group discussed research in the field and the potential of AI-driven tools to assist people in everyday life.

“You need technology, but you also need some ethical thinking behind it,” Jóhannesson said.

Jóhannesson displayed a quick wit during his visit, quipping to Sarkis that he was “on unpaid leave” from his academic post while serving as Iceland’s president. When Rus mentioned that MIT identifies buildings by number rather than name, and that she worked in Building 32, the president joked that in Iceland, “I am in Building 1.”

The visit also incorporated a lunch with Icelandic MIT faculty and Boston-area researchers, including Elfar Adalsteinsson, the Eaton-Peabody Professor in the Department of Electrical Engineering and Computer Science; Svafa Grönfeldt, a professor of the practice in the School of Architecture and Planning and faculty director of MITdesignX; and Jónas Oddur Jónasson, an assistant professor at the MIT Sloan School of Management.

The president’s visit concluded with another sit-down talk, with Grönfeldt and Gilad Rosenzweig, executive director of MITdesignX.

The Icelandic delegation consisted of about a dozen other government officials, business leaders, and scholars, including Sif Gunnarsdóttir, the president’s chief of staff; Lilja Dögg Alfreðsdóttir, Iceland’s minister for culture and business; and Nikulás Hannigan, consul general and trade commissioner at Iceland’s U.S. Embassy.