MIT’s efforts to get out the vote make an impact 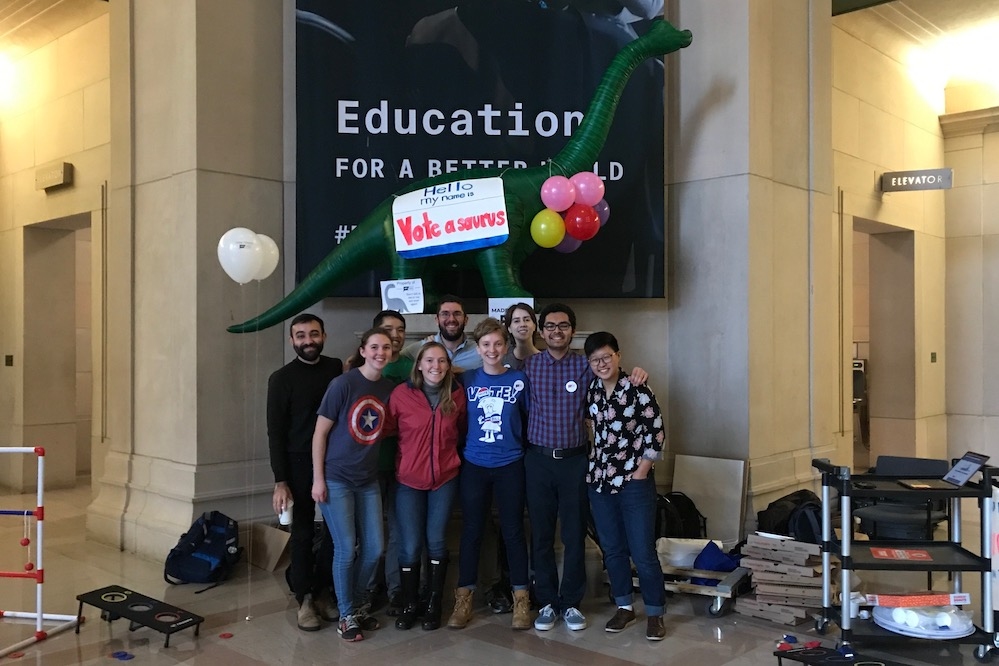 MITvote and the ALL IN initiative increased student voting in 2020 and are working to keep up the momentum for this fall's midterm elections.

Students in STEM fields are historically less likely to vote than those in other areas of study. Two nonpartisan MIT groups are working to change that, and early returns suggest they’re having an impact.

This spring, the National Study of Learning, Voting, and Engagement (NSLVE) — an initiative of the Institute for Democracy and Higher Education at Tufts University — released data showing a “stunning” increase in student voter turnout during the 2020 presidential election. The increase was especially pronounced at MIT, where voter turnout among eligible students reached 72 percent, up 13 percent from 2016 and more than 6 percent higher than the national average for participating institutions.

MIT’s youngest students were most likely to vote. Compared to student voter turnout during the 2016 presidential election, MIT saw an increase of 15 percent among eligible undergraduates, including a 23 percent increase among first-year students, significantly higher than the national average.

What’s contributing to these numbers? Students across the country were more engaged than usual in 2020, but two ongoing efforts at MIT to get out the vote may have contributed to the Institute’s strong showing.

In 2020, MIT joined the ALL IN Campus Democracy Challenge, an initiative that “empowers colleges and universities to achieve excellence in nonpartisan student democratic engagement.” Since then, the MIT ALL IN working group, led by the MIT PKG Center for Public Service, has been meeting regularly to pursue creative ways to embed civic engagement in the life of the Institute and encourage all members of the MIT community to register to vote.

The working group wasn’t starting from scratch. For years — through voter registration drives, events, educational programming, and activism — the nonpartisan student group MITvote has been striving to increase voter turnout and student engagement. The pairing of ALL IN and MITvote two years ago has helped elevate voting on campus, bringing together students, staff, and faculty to encourage participation in the democratic process.

In recognition of MIT’s sharp increase in student engagement, ALL IN recently awarded MIT a Gold Seal, presented to campuses with more than 70 percent voter participation among eligible students. And in 2021, the Institute presented MITvote with the Golden Beaver Award, in recognition of its commitment to civic engagement and voter education.

MITvote is using these data to enhance its efforts to build voter registration infrastructure among graduate communities. According to MITvote Chair Caitlin Fukumoto, “Graduate students are often more embedded within the Boston and Cambridge communities due to their length of time on campus. MITvote would love to help them become more civically involved. Voting should matter to all of us, and uniting undergraduates and graduate students on this front can help us extend voter engagement across the MIT community in nonpartisan ways.”

MITvote reaches undergraduates primarily through living spaces and graduate students through academic departments. “This approach allows MITvote student leaders to tailor their engagement approaches to each sector, as we know that the undergraduate and graduate experiences and lifestyles at MIT are so very different,” says Danny Becker, Program Coordinator at the PKG Center and advisor to MITvote.

As MITvote member Eva Then wrote in a 2020 PKG blog post, voter engagement is particularly important on campuses like MIT’s: “In a political era marked with misconstrued facts and an overall distrust in scientific reasoning, it is vital for the MIT student body to engage in the electoral process so that science-based policymaking is protected and advanced.“

Looking ahead to the midterm elections this year, ALL IN and MITvote are striving for 100 percent voter participation among MIT students and employees. MIT ALL IN working group chair and PKG Center Associate Dean and Director Jill Bassett says, “Our goal is to make it impossible to miss messaging about signing up to vote and becoming civically informed and engaged this fall. We’re going to pull out all the stops — and that, of course, means it’s time to dust off the Vote-a-saurus.”

MIT community members interested in participating in efforts to encourage civic engagement may contact MITvote or the PKG Center.