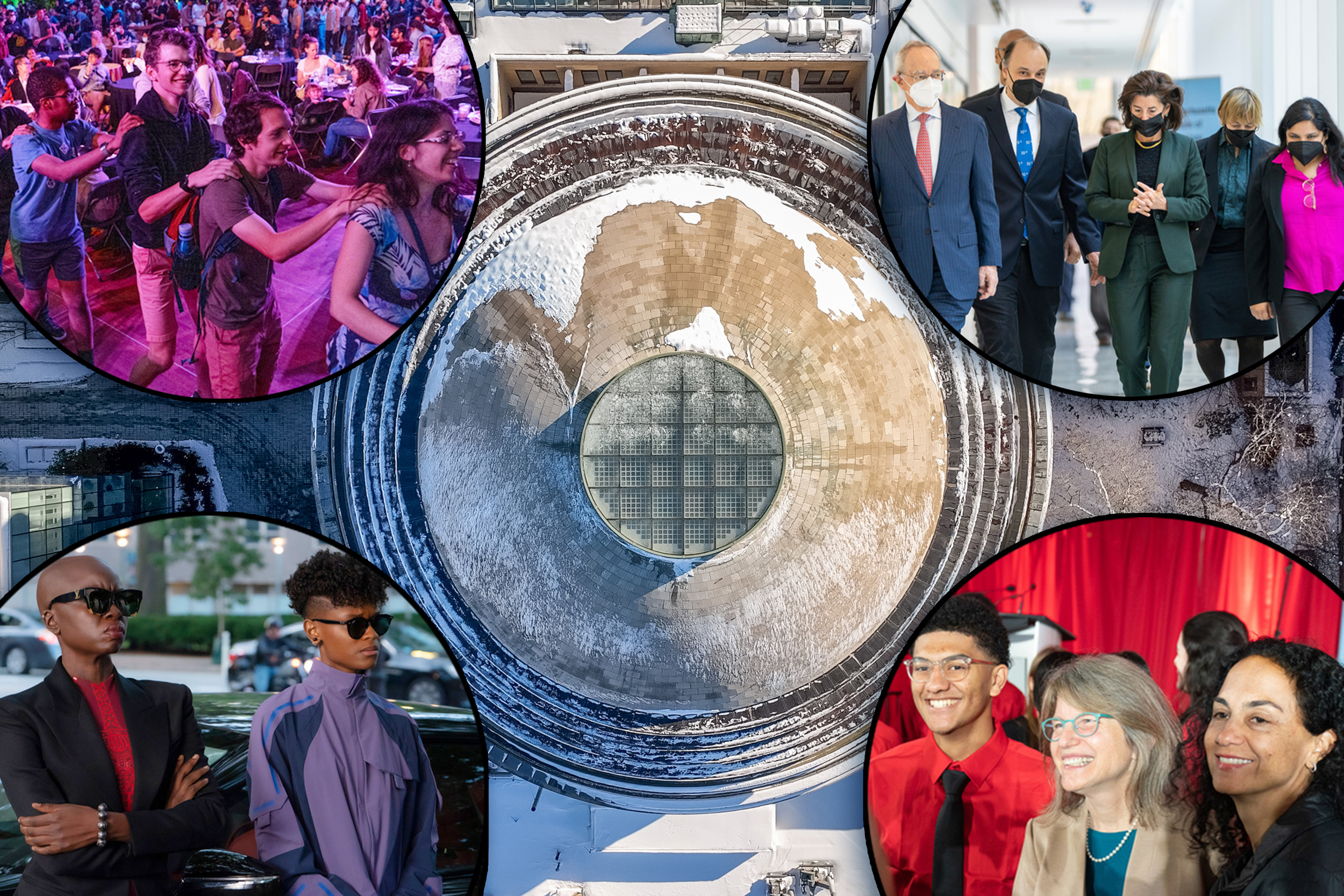 In 2022, MIT returned to a bit of normalcy after the challenge of Covid-19 began to subside. The Institute prepared to bid farewell to its president and later announced his successor; announced five flagship projects in a new competition aimed at tackling climate’s greatest challenges; made new commitments toward ensuring support for diverse voices; and celebrated the reopening of a reimagined MIT Museum — as well as a Hollywood blockbuster featuring scenes from campus. Here are some of the top stories in the MIT community this year.

In February, MIT President L. Rafael Reif announced that he planned to step down at the end of 2022. In more than 10 years as president, Reif guided MIT through a period of dynamic growth, greatly enhancing its global stature and magnetism. At the conclusion of his term at the end of this month, Reif will take a sabbatical, then return to the faculty of the Department of Electrical Engineering and Computer Science. In September, Reif expressed his gratitude to the MIT community at an Institute-wide dance celebration, and he was honored with a special MIT Dome lighting earlier this month.

After an extensive presidential search, Sally Kornbluth, a cell biologist and the current provost of Duke University, was announced in October as MIT’s 18th president. Following an introduction to MIT that included a press conference, welcoming event, and community celebration, Kornbluth will assume the MIT presidency on Jan. 1, 2023.

In other administrative transitions: Cynthia Barnhart was appointed provost after Martin Schmidt stepped down to become president of Rensselaer Polytechnic Institute; Sanjay Sarma stepped down as vice president for open learning after nine years in the role; professors Brent Ryan and Anne White were named associate provosts, while White was also named associate vice president for research administration; and Agustín Rayo was named dean of the School of Humanities, Arts, and Social Sciences.

MIT announced five flagship projects in its first-ever Climate Grand Challenges competition. These multiyear projects focus on unraveling some of the toughest unsolved climate problems and bringing high-impact, science-based solutions to the world on an accelerated basis. Representing the most promising concepts to emerge from the two-year competition that yielded 27 finalist projects, the five flagship projects will receive additional funding and resources from MIT and others to develop their ideas and swiftly transform them into practical solutions at scale.

President Reif and Vice President for Research Maria Zuber were among several MIT representatives to witness President Biden’s signing of the $52 billion “CHIPS and Science” bill into law in August. Reif helped shape aspects of the bill and was a vocal advocate for it among university and government officials, while Zuber served on two government science advisory boards during the bill’s gestation and consideration. Earlier in the year, MIT.nano hosted U.S. Secretary of Commerce Gina Raimondo, while MIT researchers released a key report on U.S. microelectronics research and manufacturing.

Supported by a $100 million founding gift, the MIT Morningside Academy for Design launched as a major interdisciplinary center that aims to build on the Institute’s leadership in design-focused education. Housed in the School of Architecture and Planning, the academy provides a hub that will encourage design work at MIT to grow and cross disciplines among engineering, science, management, computing, architecture, urban planning, and the arts.

Reports of the Institute

A reimagined MIT Museum opened this fall in a new 56,000-square-foot space in the heart of Cambridge’s Kendall Square. The museum invites visitors to explore the Institute’s innovations in science, technology, engineering, arts, and math — and to take part in that work with hands-on learning labs and maker spaces, interactive exhibits, and venues to discuss the impact of science and technology on society.

In November, the Institute Office of Communications and the Division of Student Life hosted a special screening of Marvel Studios’ “Black Panther: Wakanda Forever.” The MIT campus had been used as a filming location in summer 2021, as one of the film’s characters, Riri Williams (also known as Ironheart), is portrayed as a student at the Institute.

After two years of online celebrations due to Covid-19, MIT Commencement returned to Killian Court at the end of May. World Trade Organization Director-General Ngozi Okonjo-Iweala MCP ’78, PhD ’81 delivered the Commencement address, while poet Kealoha Wong ’99 spoke at a special ceremony for the classes of 2020 and 2021.

In case you missed it:

Additional top community stories of 2022 included MIT students dominating the 82nd Putnam Mathematical Competition, an update on MIT’s reinstating the SAT/ACT requirement for admissions, a new mathematics program for Ukrainian students and refugees, a roundup of new books from MIT authors, the renaming of the MIT.nano building, an announcement of winners of this year’s MIT $100K Entrepreneurship Competition, the new MIT Wright Brothers Wind Tunnel, and MIT students winning the 45th International Collegiate Programming Contest for the first time in 44 years.