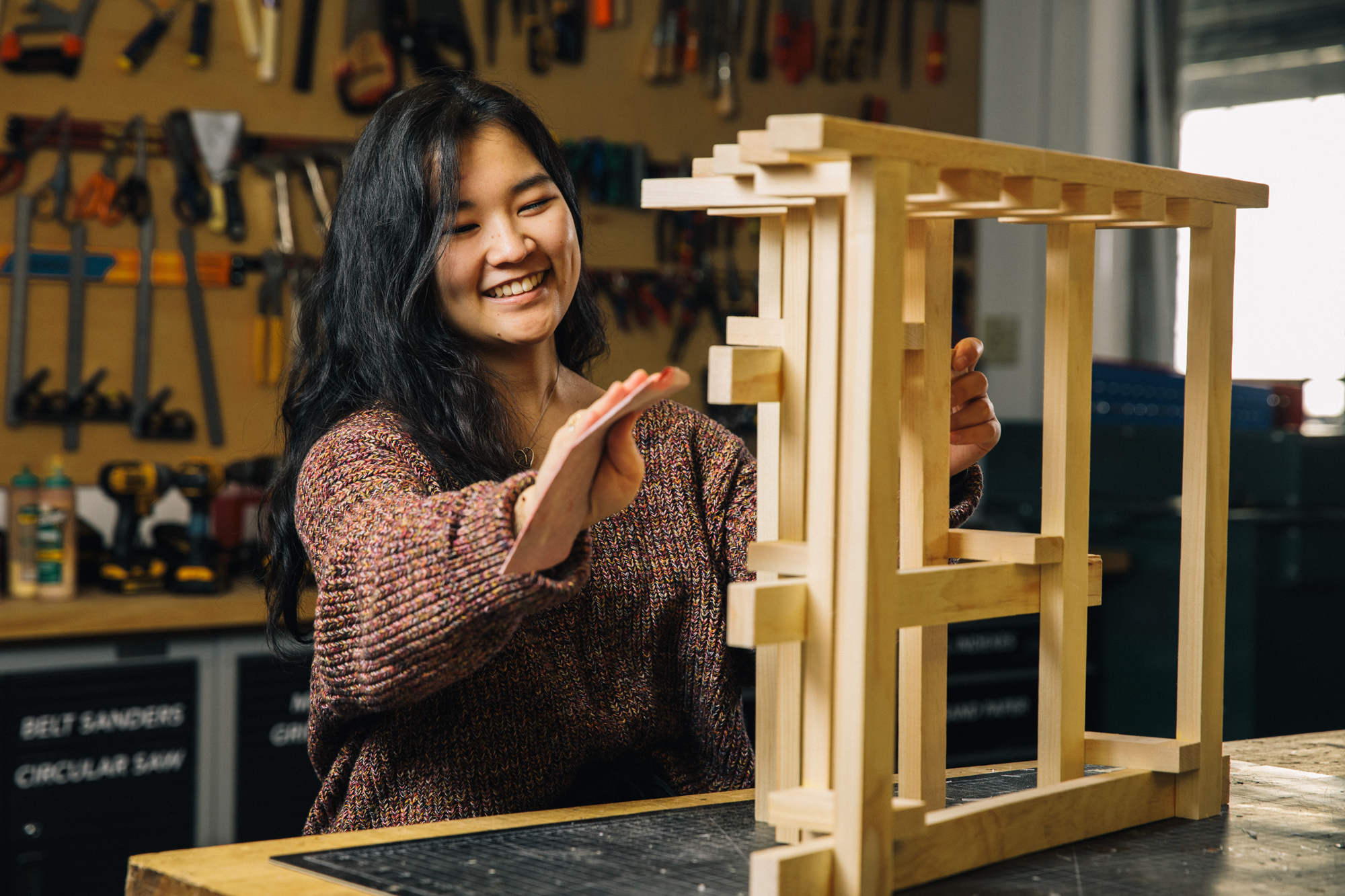 Ibuki Iwasaki came to MIT without a clear idea of what she wanted to major in, but that changed during the spring of her first year, when she left her comfort zone and enrolled in 4.02A (Introduction to Design). For the final project, her group had to make a modular structure out of foam blocks, producing a design with both two-dimensional and three-dimensional components.

The team ended up shaping 72 unique cubes, with each block’s pattern and placement carefully planned so that when assembled, they formed a structure with an unassuming facade but an intricate tunnel-like interior.

The experience taught Iwasaki she was more creative than she had realized, and that she loved the progression of the design process, from ideation to fabrication.

It also introduced her to the role that technology can play in design, whether through coding, processing components to analyze how they might fit with each other, or using programs to assess functionality or success of a model. She became excited to explore how design and technology work together.

Now a senior, Iwasaki double majors in art and design, in the Department of Architecture, and in computation and cognition, in the Department of Electrical Engineering and Computer Science, finding creative ways to develop technology that prioritizes individuals and how they think. She believes that considering the person who uses the technology is fundamental to the design.

In her first year, Iwasaki joined Concourse, a first-year learning community that integrates humanities-related and STEM-focused classes. Later, she also joined the Burchard Scholars Program, a series of dinners with professors from the School of Humanities, Arts, and Social Sciences, to learn more about the humanities experience at MIT. “Even though I was initially afraid that by choosing MIT I was choosing STEM over humanities, that was not the case,” she says.

“Design most definitely involves aspects of both humanities and STEM,” she adds.

Further experience with the technological side of design came in the summer of Iwasaki’s sophomore year, in an experiential ethics class. Tasked with looking at the visual design of social media and its effects on the user, she considered how the layout of the app was shaped by how someone might interact with the platform. For example, she looked at how an “infinite scroll” plays into rewarding behavior, which triggers a dopamine response.

“I realized cognition and human behavior factor into a lot of things, especially design,” she says.

The class sparked Iwasaki’s interest in human-centered design, leading her to look more closely at the way an individual interacts with technology. In January of 2020, she pursued her first design-related undergraduate research opportunity (UROP) through the Urban Risk Lab, which designs technology for natural disasters. Iwasaki focused on a project involving a platform that allows citizens affected by natural disasters, as well as emergency responders, to communicate information with each other in real time.

She helped design the interface of the program, considering what layout might be easiest for users to interact with. She also worked on a machine-learning component, which analyzed reports from specific areas and processing them in a way that was easy for users to understand, ultimately giving emergency responders more time to react. And she was able to sit in on workshops with Japanese emergency responders, even helping to translate their reports via Zoom. The experience was eye-opening for Iwasaki, underscoring how important the individual user is in determining how the technology is implemented.

While Iwasaki had long been intrigued by the aesthetic side of design, the ethics class and the following research project led to a new interest in functionality and a desire to learn more about cognition and behavior to better inform her designs. One of the first classes she took in this area was 9.85 (Early Childhood Cognition and Development), to explore the way young individuals think. And in the summer of 2020, Iwasaki started working in Professor Laura Schulz’s Early Childhood Cognition Lab.

Running studies over Zoom, Iwasaki read stories to children and analyzed their responses to specific questions and scenarios. She was particularly interested in studying “loophole behavior.” For example, if a parent tells their child they don’t want anything on the floor, the child, instead of picking up their belongings, might pile them on their bed, so there is technically nothing on the floor. Applying these insights to technology, Iwasaki sees loophole behavior as a way to craft accurate algorithms for information processing.

“Understanding loophole behavior in children can lead to an understanding of how computers find loopholes in code,” she says.

Working with children and studying how they learn also largely influenced Iwasaki’s senior thesis topic, where she is looking at how technology is used for education purposes, focusing on augmented reality and how it can be better implemented to enhance learning. She understands that technology has great potential for use in service of education, though there is much work to be done.

Iwasaki is also committed to helping other students navigate their MIT experience, as she is an associate advisor to first-year students through MIT’s Office of the First Year. She sees the role as an opportunity to connect with fellow undergrads and help them explore their interests. More recently, she became an associate advisor specifically for design majors, under the professor she had for 4.02A in her first year. “It’s been very rewarding for me to share my experiences and help guide first-years,” she says.

Looking ahead, Iwasaki hopes to continue studying cognition and its applications to technology and design. Specifically, she wants to look closer at her thesis topic focusing on education, using her background in cognition to inform future designs for more effective learning platforms.

“Although it sometimes felt strange to go from making a chair in one class to analyzing nematode neurons in another, I feel fortunate to have gotten the opportunity to explore both worlds, and also being able to bridge them through studying learning and designing for education,” she says.