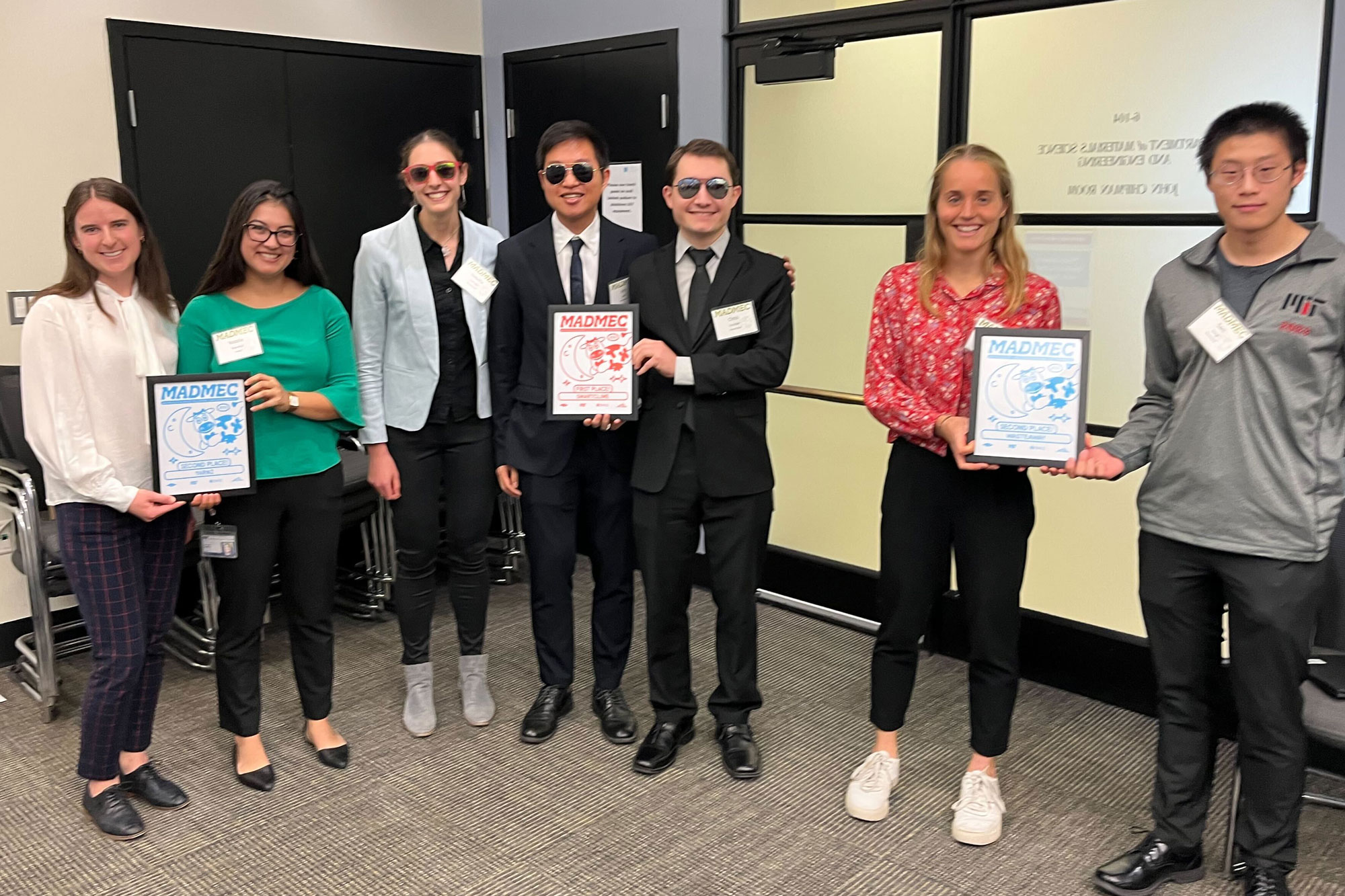 Prizes in the materials science competition also went to a waste-monitoring device and a nanofiber-based yarn.

The winners of this year’s MADMEC competition identified a class of materials that could offer a more efficient way to keep greenhouses cool.

After Covid-19 put the materials science competition on pause for two years, on Tuesday SmartClime, a team made up of three MIT graduate students, took home the first place, $10,000 prize.

The team showed that a type of material that changes color in response to an electric voltage could reduce energy usage and save money if coated onto the panes of glass in greenhouses.

“This project came out of our love of gardening,” said SmartClime team member and PhD candidate Isabella Caruso in the winning presentation. “Greenhouses let you grow things year-round, even in New England, but even greenhouse pros need to use heating furnaces in the winter and ventilation in the summer. All of that can be very labor- and energy-intensive.”

Creating both the thermochromic and electrochromic solutions required the team to assemble nanoparticles and spin-coat them onto glass substrates. In lab tests, the electrochromic material performed well, turning a deep bluish hue to reduce the heat coming into the greenhouse while also letting in enough light for plants. Specifically, the electrochromic cell kept its test box about 1 to 3 degrees Celsius cooler than the test box coated in regular glass.

The team estimated that greenhouse owners could make back the added costs of the electrochromic paneling through savings on other climate-control measures. Additional benefits of using the material include reducing heat-related crop losses, increasing crop yields, and reducing water requirements.

Hosted by MIT’s Department of Materials Science and Engineering (DMSE), the competition was the culmination of team projects that began last spring and included a series of design challenges throughout the summer. Each team received guidance, access to equipment and labs, and up to $1,000 in funding to build and test their prototypes.

“It’s great to be back and to have everyone here in person,” Mike Tarkanian, a senior lecturer in DMSE and coordinator of MADMEC, said at the event. “I’ve enjoyed getting back to normal, doing the design challenges over the summer and celebrating with everyone here today.”

The second-place prize was split between YarnZ, which identified a nanofiber yarn that is more sustainable than traditional textile fibers, and WasteAway, which has developed a waste bin monitoring device that can identify the types of items thrown into trash and recycling bins and flag misplaced items.

YarnZ (which stands for Yarns Are Really NanofiberZ), developed a nanofiber yarn that is more degradable than traditional microfiber yarns without sacrificing on performance.

A large chunk of the waste and emissions in the clothing industry come from polyester, a slow-degrading polymer that requires an energy-intensive melt spinning process before it’s spun into the fibers of our clothes.

“The biggest thing I want to impress upon you today is that the textile industry is a major greenhouse gas-producing entity and also produces a huge amount of waste,” YarnZ member and PhD candidate Natalie Mamrol said in the presentation.

To replace polyester, the team developed a continuous process in which a type of nanofiber film collects in a water bath before being twisted into yarn. In subsequent tests, the nanofiber-based yarn degraded more quicky than traditional microfibers and showed comparable durability. YarnZ believes this early data should encourage others to explore nanofibers as a viable replacement in the clothing industry and to invest in scaling the approach for industrial settings.

WasteAway’s system includes a camera that sits on top of trash bins and uses artificial intelligence to recognize items that people throw away.

Of the 300 million tons of waste generated in the U.S. each year, more than half ends up in landfills. A lot of that waste could have been composted or recycled but was misplaced during disposal.

“When someone throws something into the bin, our sensor detects the motion and captures an image,” explains WasteAway’s Melissa Stok, an undergraduate at MIT. “Those images are then processed by our machine-learning algorithm to find contamination.”

Each device costs less than $30, and the team says that cost could go down as parts are bought at larger scales. The insights gleaned from the device could help waste management officials identify contaminated trash piles as well as inform education efforts by revealing common mistakes people make.

Overall, Tarkanian believes the competition was a success not only because of the final results, but because of the experience the students got throughout the MADMEC program, which included several smaller, hands-on competitions involving laser cutters, 3-D printers, soldering irons, and other equipment many students said they had never used before.

“They end up getting into the lab through these design challenges, which have them compete in various engineering tasks,” Tarkanian says. “It helps them get comfortable designing and prototyping, and they often end up using those tools in their research later.”