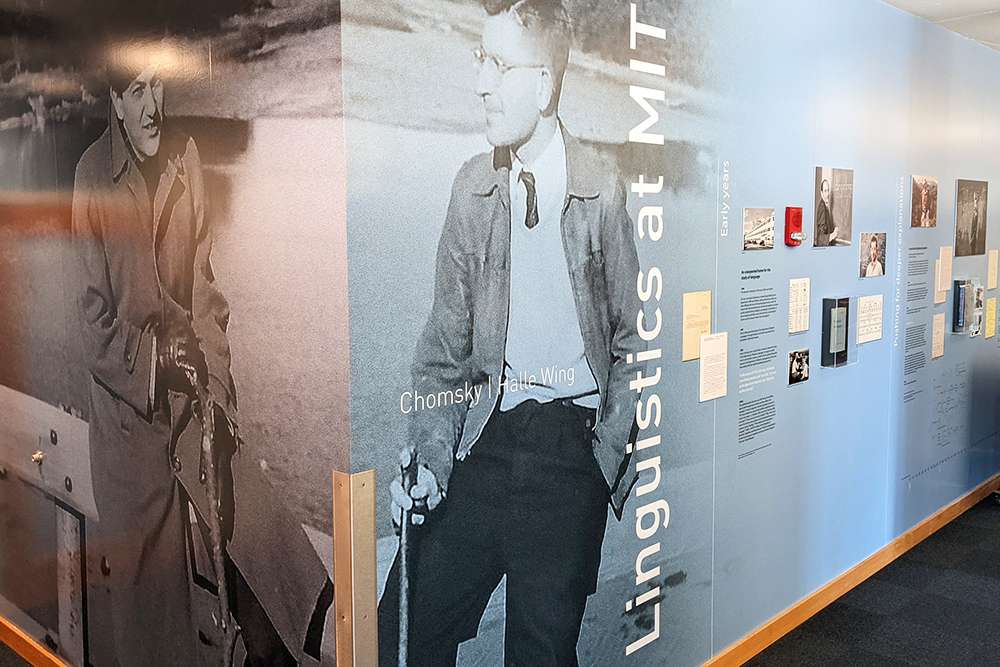 A Stata Center wing and celebratory event mark their achievements and the next generation of linguistics research at MIT.

Nearly 60 years ago, Noam Chomsky and Morris Halle established the MIT Department of Linguistics. This spring, the department dedicated a wing of its Stata Center home to these founding fathers.

“Together, they defined and transformed the entire field of linguistics,” says Danny Fox, the Anshen-Chomsky Professor of Language and Thought and department head. “Naming the wing after them seemed like a way of indicating their centrality not only to our discipline but in so many ways to all of cognitive science.”

Halle, who taught at MIT from 1951 to 1996, and became an Institute Professor, died in 2018. Chomsky came to MIT in 1955 and retired in 2002, continuing his research as Institute Professor Emeritus. He moved to the University of Arizona several years ago, where he is laureate professor of linguistics. Halle and Chomsky shared an office in MIT’s fabled Building 20, and when it was demolished, they moved to a space in the Stata Center. After Chomsky’s departure, this area was redesigned for use as the department’s Language Acquisition Lab.

“With our growing emphasis on experimental work, it seemed natural to devote this space to our new lab,” says David Pesetsky, the Ferrari P. Ward Professor of Modern Languages and Linguistics, and former department head. “Both Noam and Morris were my teachers in the early 1980s, and no student today can work in this field without being influenced by them. We thought it would be wonderful to name this area for our beloved colleagues, who taught so many of us.”

At an event that combined celebration with reunion, Chomsky delivered a virtual lecture titled “Genuine Explanation and the Strong Minimalist Thesis,” which was made available to the entire MIT community. After the talk, faculty, alumni, and graduate students — representing the ancestral tree of linguists trained by Chomsky and Halle directly, and by their protégées — engaged in lively colloquy with Chomsky in line with time-honored linguistics department tradition.

At the reception afterwards, friends and family toasted the long-lived partnership. Jay Keyser, professor emeritus of linguistics, described the “deep affection” Chomsky and Halle had for each other. “It was one of those rare moments in history when their paths converged,” he said. “Like Darwin, Newton, Einstein, and Niels Bohr, they were scientists who changed the way we looked at ourselves.”

Robert C. Berwick, a professor of computer science and engineering and computational linguistics, characterized the two as “playing together in an especially complementary way.”

Halle’s son Tim spoke of “the lifelong friendship that defined them both,” and John described roaming the halls of Building 20 and noticing “how much fun people were having in their labs,” he said. “There was arguing and the point was to make progress, advance the science, but laughter is what I remember most.”

Just 15 years earlier, Pesetsky remarked, he could walk down the hall if he “wanted to argue with Morris or find out what Noam had to say about something,” Today, in the revamped wing, “we do much the same, learning from and arguing with each other, in the spirit of the department they created.”

“My main reaction when I learned about the dedication was, I must admit, nostalgia,” says Chomsky. “I started thinking how Morris and I had worked together all these years, since we met as graduate students in the mid-20th century.” The two commuted to campus on the subway, and later Chomsky would drive them both in. “When Morris and I decided in the late 1950s to start a department, even to us it seemed a pretty wild idea. Would students come to MIT to study linguistics — which was not yet recognized as a field? To our surprise, a group of outstanding students came the first year, and then our contemporary form of linguistics exploded, moving around to the rest of the country and elsewhere in the world.”

This newly defined discipline aimed to characterize human language acquisition as a unique and biologically based trait. Chomsky specialized in syntax, and Halle on phonology, but they produced seminal texts together, such as “The Sound Pattern of English.” They also served as the engine driving a tight-knit group of graduate researchers and young faculty.

Among them was Donca Steriade, the Class of 1941 Professor of Linguistics. “Morris had a seriousness of purpose in science that obliterated everything else,” she recalls. “One could agree or disagree with him over points of doctrine or the ways in which we carried out our work, but there was no question that he was profoundly dedicated to finding the truth.” As a young researcher, Steriade found it reassuring that Halle and Chomsky “viewed their lives as organized around the act of doing science.”

Steriade and other students were held to high standards. “There were quite a few of us as graduate students whom Morris suggested shouldn’t be in the field, and it wasn’t easy always being tested,” she says. But Halle was also “interested in each of us as individuals as well as a source of ideas, and curious about what kind of human beings we were.” His critiques were intended to compel young researchers to embrace linguistics not as a career so much as a path for advancing science. “Don’t look at data without a purpose; Morris and Noam never forgot this, and I never forget this,” says Steriade.

At the MIT Language Acquisition Lab, Associate Professor Martin Hackl and Assistant Professor Athulya Aravind currently investigate how human infants and children determine the properties of their native language in a startlingly brief period of time. Aravind is acutely aware of what it means to conduct her research in the newly dedicated wing. “We are standing on the shoulders of giants like Chomsky and Halle,” she says.

While theorists such as Chomsky and Halle laid down the theoretical foundations for language acquisition, the experimental field has lagged, she says. “We are dealing with a special population, infants and young children,” she adds, “which has made it difficult to collect empirical data to help us understand what kids know about language, and the biological origins of language development.”

At the lab, Aravind and her colleagues are devising new methods and behavioral measures to explore how babies and toddlers pick up language. “What are slowing us down are just practicalities,” she says. Joining her in the lab are similarly dedicated graduate researchers, another legacy of the Chomsky-Halle collaboration, she notes. “Their vision was specific: They insisted that graduate students must be part of the process of scientific discovery from the get-go, and their ideas and findings must be taken seriously by senior faculty, and they must take themselves seriously as well.”

Chomsky says he could not be more heartened by the experimental and educational objectives of Aravind and her colleagues. “It is very gratifying to have this wing dedicated to new research, which is really exciting work at the frontiers of understanding,” he says. Chomsky also sees no end of questions to explore in the field. “Every time you make a discovery, it opens up a door to new problems, which will go on indefinitely. Somehow, each of us finds new thoughts in our minds, maybe new in the history of language, or in our experience. How do we do that?  Nobody has a clue. That one we may never solve.”