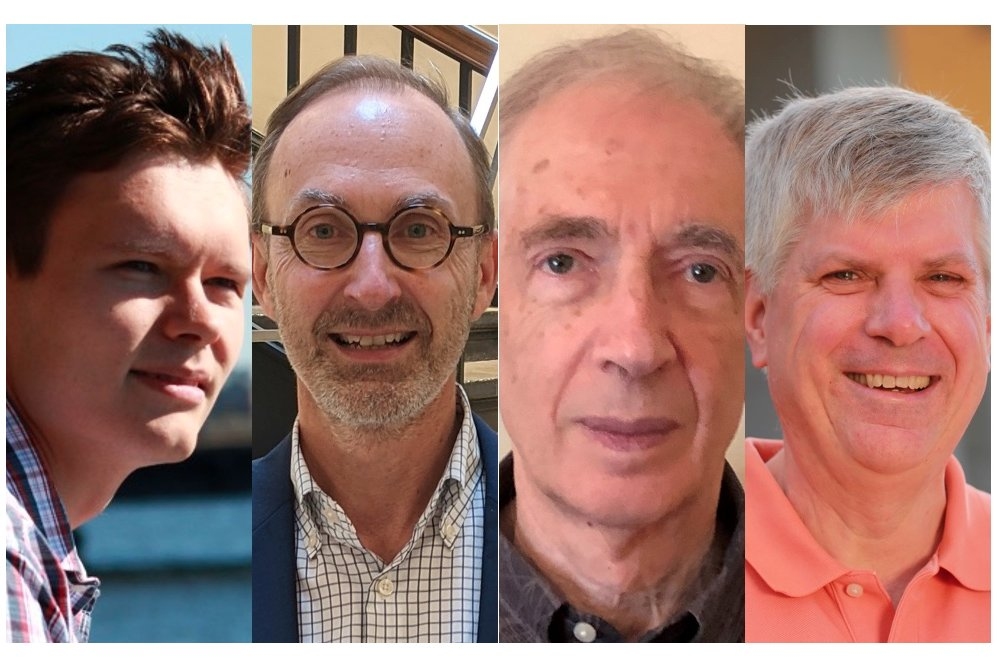 All four will be recognized for their achievements at April’s virtual 2022 Joint Mathematics Meetings. They will be joined by two MIT mathematics graduate students, Travis Dillon, who will receive the 2022 AMS-MAA-SIAM Frank and Brennie Morgan Prize for Outstanding Research in Mathematics by an Undergraduate Student, and Alex Cohen, who will receive the 2022 Frank and Brennie Morgan Honorable Mention Prize.

“Stanley has revolutionized enumerative combinatorics, revealing deep connections with other branches of mathematics, such as commutative algebra, topology, algebraic geometry, probability, convex geometry, and representation theory,” according to the AMS citation. “In doing so, he solved important long-standing combinatorial problems, often reinvigorating these other fields with new combinatorial methods. Through his outstanding research, excellent expository works, and many PhD students, collaborators, and colleagues, he continues to influence the field of combinatorics worldwide.”

He received his BS in mathematics from Caltech in 1966, and his PhD in mathematics from Harvard University in 1971. After postdocs at MIT and the University of California at Berkeley, Stanley began teaching at MIT in 1973 and retired in 2018. He received the Steele Prize for Mathematical Exposition in 2001, as well as the SIAM George Pólya Prize in Combinatorics in 1975, and the Rolf Schock Prize in Mathematics in 2003.

“When I started working in enumerative and algebraic combinatorics around 1967, I was greatly attracted to the vision of my thesis adviser Gian-Carlo Rota, who saw glimmerings of deep connections between combinatorics and other branches of mathematics,” recalls Stanley. “Throughout my career, it has been gratifying to see many highly talented aspiring mathematicians decide to work in algebraic and enumerative combinatorics.”

Goemans and Williamson will receive the 2022 Steele Prize for Seminal Contribution to Research for their 1995 paper “Improved Approximation Algorithms for Maximum Cut and Satisfiability Problems Using Semidefinite Programming,” in the Journal of the ACM. This paper, which focused on the Max‐Cut problem, a core problem in combinatorial optimization, “has had major, sustained impact on the fields of theoretical computer science and optimization theory,” according to the AMS.

Goemans received BS and MS degrees in applied mathematics from the Université Catholique de Louvain in 1987 and completed his PhD at MIT in 1990. He continued at MIT as an instructor, and is currently the department head and the RSA Professor. He previously was a Robert E. Collins Distinguished Scholar in Mathematics and held the Leighton Family Professorship in Mathematics.

Goemans’ research is in combinatorial optimization and algorithms, in particular developing new techniques for designing approximation algorithms. He has developed techniques for the design and analysis of efficient approximation algorithms for discrete optimization problems, with provable guarantees on the quality of the solution produced. He received the A.W. Tucker Prize (1991), the SIAM Activity Group on Optimization Prize (1996 and 1999), the IBM Faculty Partnership Award (2000), and the MIT School of Science Student Advising Award (2004). In 2006, the department selected him for the Robert E. Collins Distinguished Scholarship. A prior Sloan Fellow and NSF Career Awardee, Goemans received a 2007 Guggenheim fellowship. In 2021 he received the George B. Dantzig Prize from Mathematical Optimization Society and SIAM. He was selected for the Leroy P. Steele Prize of the AMS for Seminal Contribution to Research in 2022.

“My work over the years has been deeply influenced by the many transformative contributions of Laci Lovász and Lex Schrijver,” says Goemans. “When I learned about the so-called Lovász-Schrijver matrix cuts (for strengthening binary optimization problems) at a DIMACS workshop in 1989, I started wondering how tightly semidefinite relaxations can approximate various (hard) combinatorial problems. The simplest such problem to consider was fairly naturally the maximum cut problem. Although easy to state, the journey was long and the failures almost uncountable.”

Adds Williamson, “We hit on the idea of using a random hyperplane to partition the vectors. The analysis of the main result quickly followed. I sometimes tell my students (and myself) this story to explain why persistence is important and why one shouldn’t give up too quickly on one’s ideas.”

Williamson’s and Goemans’ work on the uses of semidefinite programming was awarded the AMS Delbert Ray Fulkerson Prize in 2000. Williamson was at IBM’s Almaden Research Center before joining Cornell University in 2004, with a joint position in the School of Operations Research and Information Engineering and the Department of Information Science. Williamson’s research interests lie in the area of discrete optimization, in particular approximation algorithms.

He is a co-author of the book “The Design of Approximation Algorithms,” which won the 2013 INFORMS Lanchester Prize. His PhD dissertation on designing low-cost survivable networks was awarded the 1994 Tucker Prize from the Mathematical Programming Society.

Associate Professor Semyon Dyatlov will receive the inaugural 2022 Mikhail Gordin Prize, offered jointly by the AMS and the European Mathematical Society. This is awarded to a mathematician working in probability or dynamical systems, with preference given to early-career mathematicians from, or professionally connected to, an Eastern European country; Dyatlov was born in Novosibirsk, Russia.

Dyatlov, who joined MIT in 2015, is recognized for his work on quantum chaos, scattering theory, and, in particular, differentiable dynamical systems.

“He has been the leading force in applying micro-local methods to the study of classical hyperbolic dynamics in ways that have proved useful in the study of dynamical (Ruelle) zeta functions and Axiom A flows,” says the AMS citation.

Dyatlov received his BS from Novosibirsk State University in 2008 and his PhD from the University of California at Berkeley in 2013, under the guidance of Maciej Zworski, with whom he wrote “Mathematical Theory of Scattering Resonances.” He received a Sloan Research Fellowship in 2017, the IAMP Early Career Award in 2018, and an NSF CAREER grant in 2018, and is an invited speaker at the International Congress of Mathematicians in 2022.

Dyatlov thanked those “who have introduced me to micro-local analysis and hyperbolic dynamics, on the interface of which much of my research has happened,” including the late Jean Bourgain for collaborations on quantum chaos and the fractal uncertainty principle.