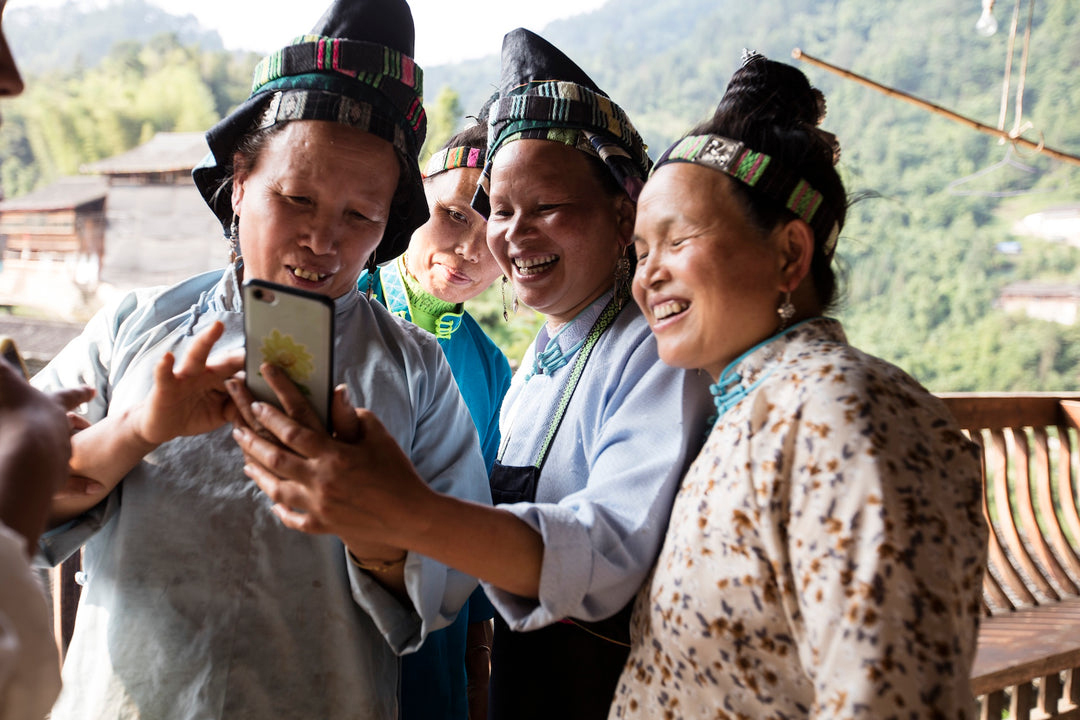 Many young people in rural communities around the world feel the need move to big cities in order to find work. The migration has unfortunate ripple effects. In the cities, people with less formal education are often relegated to slums and can become the victims of exploitation. Meanwhile, the families, communities, and rich cultural traditions get left behind.

For the last six years, Roots Studio has worked with rural communities to preserve their culture and make a living by licensing their art. The company helps indigenous artists and communities of color license their work to designers, textile manufacturers, and fashion companies around the world.

“We use technology as a way to bypass the [conventional] supply chain,” says Roots Studio founder and CEO Rebecca Hui SM ’17.

Roots Studio focuses on building lasting relationships with the communities it partners with. Roots Studios grassroots organizers spend time learning about the concerns of each community as well as understanding the meaning and stories behind the art. The company holds regular technology and intellectual property workshops with its partner artists. When the art is licensed, 85 percent of the profits go to the community and 15 percent go to the contributing artists.

Roots Studio is already working with thousands of artists in rural communities of Asia, Africa, and Latin America. The company has been supported by Cartier, Chanel, and Vogue Business and has launched collaborations with brands including Outdoor Research and prAna.

As a result, endangered heritage art has been adapted onto clothes, backpacks, shoes, and more, with artists collecting royalties on every sale.

In addition to giving artists what is often life-changing income, Hui says Roots Studio is helping artists reimagine the formats in which their art can be seen.

“The cultural preservation and craft field is often so nostalgic that it recognize that culture is not static — it evolves with the future generations that inhabit that culture,” Hui says. “Creativity continues by evolving on different formats. If we stay overly nostalgic, the life of the work will die out because the ways in which stories are consumed will always change. Many younger generations want to move along with the pulse of the world while letting the artists retain their authorship.”

Before coming to MIT, Hui spent three years in India as part of a project studying human-animal coexistence in urban and indigenous communities.

“I spent a lot of time living with rural communities and was humbled by the depth of creativity and knowledge that they hold about sustainability, craft, and storytelling,” Hui recalls. “But I was also hearing the narrative, ‘We have to migrate to make a living. As a creative myself, I was baffled by the “struggling artist” dilemma that creative people face globally when artists are at the heart of innovation, yet are often the victims of gentrification while their work inspires massively profitable industries.”

At the same time, Hui was aware of the growing push for sustainability by Western consumers.

“I was seeing the contrast between an industry that’s trying to scale sustainability, and indigenous communities who have cared for the seed,” Hui says. “That gap made me eager to bridge these worlds to move forward together on defining sustainability.”

Hui began learning about indigenous artists’ work while living in rural west Bengal amongst a number of artist communities. Around 2014, while running artist workshops, she started to explore mediums in which the work could exist in higher-value markets. She applied for 26 grants to help scale the work but was denied for them all.

Seeking another path to scale the work, Hui applied for a master’s program in MIT’s Department of Urban Studies and Planning, although she remained hesitant to leave the partner communities. At an MIT open house for accepted students, Hui was offered a research fellowship through the MIT Tata Center, which would pay her tuition in addition to funding research trips back to India.

“I had no money or resources to keep funding workshops [at the time],” Hui recalls. “When the Tata fellowship came in, I knew I had a base to work with.”

Once on MIT’s campus, Hui wasted no time making up for the lost grants. The first entrepreneurial program she participated in was the IDEAS Social Innovation Challenge, where Roots Studio won the top prize.

“I was ecstatic because for years it felt so difficult to make people understand the realities on the ground, but finally here was someone who would back us,” says Hui, who estimates her team had worked with over 1,000 artists at that point. “It helped us gain confidence.”

The IDEAS prize was the first of many awards Roots Studio would win. From there, Hui got support from the MIT Sandbox Fund, MIT D-Lab, and the Legatum Center. Hui also participated in MIT’s delta v summer accelerator and won the Creative Arts Prize.

The support gave Hui the resources to experiment with different business models and continue learning from her partner communities, which she did during every break in classes she got.

One of Roots Studio’s first initiatives at MIT was to collaborate with a group of artists to put their work on notebooks. Hui still remembers filling her dorm room in Ashdown House with 3,000 notebooks from India. MIT helped her sell those books at international trade shows, then she would distribute the proceeds to the communities on her next trip to India.

Through the work, Hui refined her approach for unleashing the creative potential of artists using new formats. Today Roots is bridging the gap between communities with rich cultural traditions and consumer markets around the world.

“We aim to increase artist’s annual income by at least 15 percent, but some of the returns have tripled people’s annual household income,” Hui says.

The company also seeks to support communities holding knowledge in arts that are in danger of being lost in this generation.

“A lot of the conversations around moving to different mediums are about learning what a community is okay with or not okay with, so it’s a co-educational dialogue,” Hui says.

By creating collaborations between thoughtful brands and communities, Hui believes Roots Studio is reframing perceptions around the value of art and who it is made by.

“Rural communities have faced generations of exploitation and discrimination,” Hui says. “But that doesn’t define who they are. They hold a boldness and audacity that adds a much-needed freshness to the visual and ideological monotony of western artistry.”

Roots Studio has already proven there is a market for the artwork. Along the way, it has allowed communities to preserve their culture on their own terms.

“A vision for us is to reimagine the idea of a prosperous village in the rural economy, and to do so in a way that acknowledges the culture and the creative skills that are based off of generations of knowledge and creativity,” Hui says. “They hold a treasure inside them. Now it’s just about getting it out in the right ways for the world to appreciate.”