A factory for FrEDs at MIT 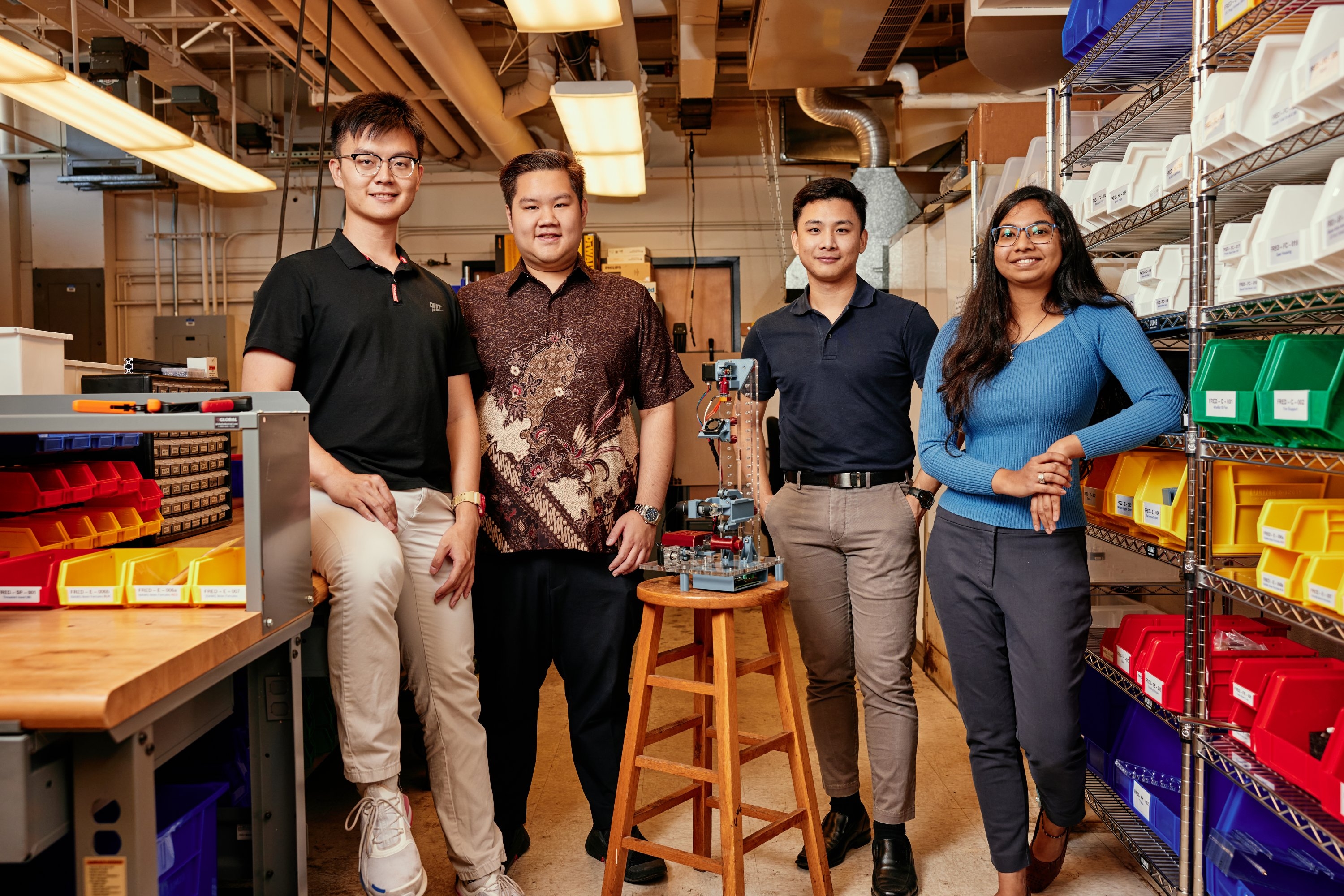 MIT is famous as a factory of ideas. You could also call MIT a factory for learning. But for one group of students over the past year MIT has been, in fact, a factory.

The team of graduate students designed and built — entirely within an MIT lab — an assembly factory for a low-cost, reconfigurable desktop fiber extrusion system.

The factory was the students’ thesis project in the Master of Engineering in Advanced Manufacturing and Design. The team transformed the fiber (Fr) extrusion (E) device (D), or FrED, from a single $5,400 proof-of-concept unit to 25 units manufactured at a cost of about $200 each — a 96 percent reduction in cost.

The FrEDs are ready to be delivered to advanced manufacturing students in Monterrey, Mexico, as part of a long-term collaboration between Tecnológico de Monterrey and MIT, said Brian Anthony, associate director of MIT.nano and faculty lead for the Industry Immersion Program in Mechanical Engineering, who advised the students.

The devices and the factory are part of a “virtuous cycle of education,” Anthony says. “The devices will be used as a teaching tool in undergraduate and graduate classes at both MIT and Monterrey Tec this academic year, as well as in manufacturing workforce professional education in Mexico. The factory at MIT itself will continue to serve as a platform to teach our students about assembly-line design and other manufacturing concepts.”

“A glue gun on steroids”

The original FrED was built in 2017 by Anthony’s PhD student David Kim. Feed in glue sticks, and the system extrudes, cools, and spools fiber, guided by sensors along the way. The compact, relatively low-cost product teaches students about manufacturing and control systems through a device where they can change various processes to vary the final fiber diameter.

This “glue gun on steroids” is a good tool for both students and professionals, Anthony says, because it represents “a balance between a process that is conceptually easy, but as soon as you can get under the hood a little bit it can be made very complex.”

To extend its usefulness and reach, FrED needed to be even less expensive, easier to assemble, and more user-friendly. That’s where Russel Bradley, Aviva Jesse Levi MNG ’22, Rui Li MNG ’22, and Tanach Rojrungsasithorn MNG ’22 come in.

The graduate student team worked part time in the spring and full time in the summer to build and test a new FrED prototype, figure out a way to manufacture the device at scale, and then set up a supply chain and assembly line to build the 25 units. The new FrED takes about 12 minutes to build out-of-the-box, the team found during user testing.

They divided up the work: Rojrungsasithorn managed the factory and ensured the right equipment was in place, Levi worked on the design of extruding the fiber preform and the overall structure of FrED, Li developed the fiber and diameter measuring systems, and Bradley worked on the device electronics.

The team found several ways to bring down FrED’s cost. To begin with, they switched many of the parts from metal to plastic and used 3D printers to make some parts in-house.

The team experienced some supply chain issues related to the pandemic, but “we sourced a lot of standard parts,” Levi explains. “A lot of the gears that are part of the extrusion system are off-the shelf, you can buy them at Amazon or McMaster-Carr or these standard websites, so that also helped.”

As Li worked on the device’s filament collection system, which contains several gears, he found that the variation in 3D-printed parts “was even more than I expected. It was challenging to see that in the real world versus a textbook.”

The new design reduced the number of microprocessors and motors, and changed the expensive laser micrometer measurement system, replacing it with “a concept that uses cameras and machine learning and machine vision theory instead,” says Bradley.

The team also created a set of 3D design files and standard manufacturing and operating procedures so the students in Monterrey or other places “can replicate our production factory, and later generations [of FrED] can be as close to ours as possible,” Rojrungsasithorn notes.

Setting up the factory taught the team another important lesson: it can be challenging at first to bring individual parts together to work as a system. “Sometimes there are errors that you don’t see before you put everything together,” Bradley says.

The project confirmed for Levi, Li, and Rojrungsasithorn that the next steps in their career lie in manufacturing and design. Levi took a job as a mechanical design engineer at Tesla, Li is working as a mechanical tool design engineer at Intel, and Rojrungsasithorn moved back to Thailand to work in his family’s factory, which makes racks that store parts supplied to car manufacturers.

Bradley is at MIT for one more year, maintaining the factory and using it as a teaching tool in a class about manufacturing systems. Having the factory on campus “is really something special,” he says, as most universities only have makerspace-type facilities to create one or two prototypes.

At Monterrey, the new FrEDs will be used “to teach engineers concepts related to process control, sensors, machine learning, and manufacturing processes,” Anthony adds, with an eye to someday setting up a factory on the campus in Mexico.