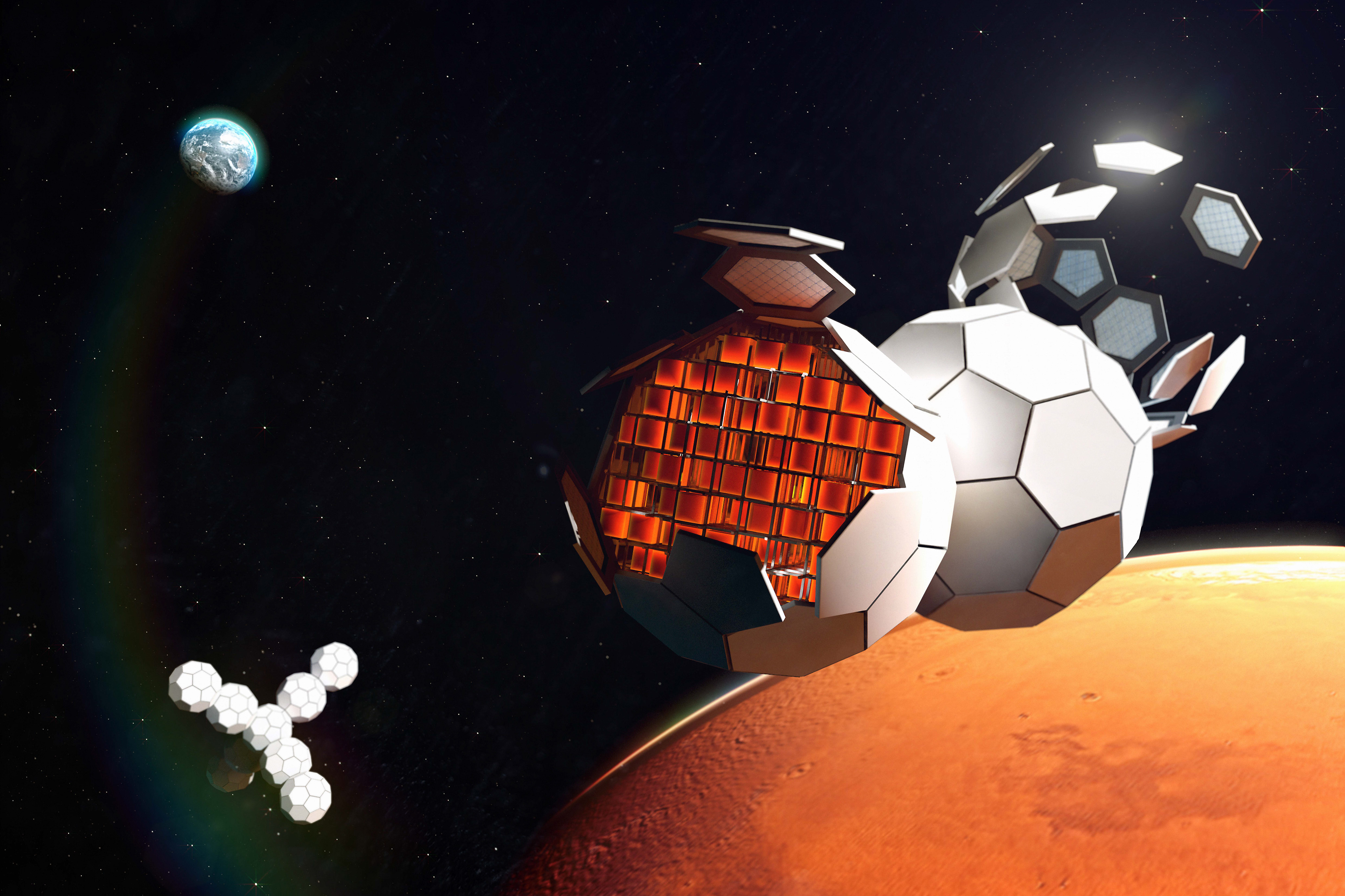 The TESSERAE project, a design for self-assembling space structures and habitats, has sent prototypes to the International Space Station.

Living in space today is a cramped and utilitarian endeavor. Astronuats who arrive on the International Space Station (ISS) are prepared for a stay in tight quarters, surrounded by exposed wiring, bulky electronics, and floor-to-ceiling beige paneling.

But what if in-orbit accomodations could be more spacious, livable, and even beautiful? That’s a question driving TESSERAE, an ambitious space architecture project led by Ariel Ekblaw SM ’17, PhD ’20, the founder and director of the Space Exploration Initiative in MIT’s Media Lab.

TESSERAE (an acronym for Tessellated Electromagnetic Space Structures for the Exploration of Reconfigurable, Adaptive Environments) is Ekblaw’s unique design for future space habitats, based on a system of magnetic, self-assembling tiles. The basic idea is that, once deployed in space, wall-sized tiles would connect autonomously to create spacious, habitable, and reconfigurable structures.

In April, the project cleared a recent milestone when TESSERAE samples were flown up to the ISS with Axiom Space AX-1, the first ISS-bound mission to fly a fully privately-funded crew. During their 15-day stay, the paying astronauts ran tests on TESSERAE, along with other science projects aboard the space station.

Following the mission, MIT News checked in with Ekblaw to see how TESSERAE fared, and what the future of space habitats might hold.

Q: What is your vision for TESSERAE? How could this architecture change the way we build and live in space?

A: Our long-term vision is to be able to scale humanity’s presence in orbit, which means being able to build large-scale, inspiring space architecture that really delights people as they float inside — that sense of goosebumps you get when you walk inside a beautiful stunning cathedral or a concert hall.

What would it look like to be able to build large-scale structures like that in orbit? How can we build so that we are no longer constrained by the size of the rocket we’re sending into orbit? That led us to look at self-assembly of modular tiles that can be packed flat for their ride to orbit, and can build up and self-assemble autonomously into a larger-scale structure once they are released.

The first structure we’ve designed is based on a buckyball geometry, which has one of the best surface area-to-volume ratios. We want to maximize volume for the given surface area, which is the expensive material that has to get shipped up into orbit.

Within this tessellated buckyball, we’re hoping it could be either a single room, about the size of a crew quarters, or the galley for a kitchen, or a science lab. And then you could stack multiple modules on top of each other to create a station. Further in the future, we might be able to have a really grand, large buckeyball in orbit that has much more open space, and is something more like a space cathedral or concert hall or gathering space.

Q: Walk us through the tech — what makes TESSERAE work?

A: The tiles themselves are custom-designed so the geometry of the tiles when they dock forms a particular target shape. The way that they dock is dependent on custom, novel-designed electro-permanent magnets. These are magnets that are always on, and always want to pull objects together without requiring any power, which is good for power budgets on orbit. But then when you want the tiles to separate, you run a current through the magnets and they can undock autonomously. The final piece is the code and the sensing that’s allowing these tiles to detect their own status with their neighbors and to make decisions around whether they should be staying together or separating.

Q: How did the structures fare in the ISS tests?

A: I was very lucky through my PhD, as I was able to test TESSERAE on a couple parabolic flights, a suborbital launch with Blue Origin, and a 30-day mission aboard the International Space Station. But what was different about that last mission was that the tiles were trapped in a relatively small box. So, this new mission with Axiom is a huge new improvement and a major milestone in the project because we were able to test the tiles in a much larger contained volume called the MWA, the Maintenance Work Area inside Node 2 on the ISS. And even better, the astronauts were given approval to take the tiles out of containment and allowed to completely free-float and self-assemble in the aisleway.

This was a great opportunity for us to test three things. The first was calibration. We wanted to demonstrate a good bond between two tiles, and to observe a bad bond and see if the tiles autonomously separated as they were supposed to, and that was successful. Second, we wanted to see how many tiles could come together accurately on their own in a short period of a few minutes; we routinely saw two diads and triads come together. And third, the astronauts helped pop the tiles together into a dome, and we wanted to see if that dome was a stable configuration. It was possible that the density of magnets would mistakenly trigger the sensors, causing the tiles to pop away from each other. But they didn’t  — they held that formation, and we were able to get a photo of that stable dome in front of the cupola.

These tiles are a miniature testbed platform, the size of my palm. We’re working in parallel on several additional tracks to get to the human habitation scale. We’d like to iteratively scale this technology up, from palm-sized to dinner-plate-sized tiles, and pack them on a CubeSat where they would be stacked like a Pez dispenser in a big inflatable cage. The tiles would be dispensed into a big space and allowed to do complete self-assembly outside of the space station. We’re also building a human-scale tile. We need to figure out where the magnets will go, and how much power architecture is required, which we will eventually merge into a habitat-scale deployment.

There’s a lot of engineering development work to be done, and I consider myself very lucky to have started this project at MIT, where there’s this incredible storied history of aerospace, and amazing mentors and collaborators. Absolutely within my lifetime, our intention is to have this be a technique of self-assembling space structures in orbit that humans can actually live in.