Hunting for what we lost

Hunting for what we lost

It is a unique feeling to be having such a fantastic time that you make yourself hopelessly, achingly sad.

During the Independent Activities Period (IAP) this past January, the annual MIT Mystery Hunt took place, and I competed with my undergraduate team, NES*. For those that don’t know, the MIT Mystery Hunt is a puzzle hunt that has been going on since 1981, when Dr. Brad Schaefer offered a prize to whomever could locate the penny he had hidden on campus by solving his puzzle (more information can be found here). Since then, it has grown to attract hundreds of teams across the nation, competing for the honor of making the next hunt. This year’s was run by ✈✈✈ Galactic Trendsetters ✈✈✈. (Pronounced: WHOOSH! Galactic Trendsetters NYEOOOMM!). As of this writing, you can find the hunt on the website perpendicular.institute. It will later be stored, along with older hunts, here.

The MIT Mystery Hunt is fun in a frustrating and bizarre way. I mean, when else do you need to frantically google luge tracks in Latvia in order to win the heart of a character in a dating sim, extract letters from spoken square dancing instructions, or calculate the number of solutions to underconstrained sudoku puzzles? Oh, by the way, knowing you need to do these things isn’t intuitive, either. When you open a puzzle, you’ll be greeted by any number of things: a few paragraphs of text, an empty crossword, a bunch of photoshopped images, a series of TikToks … the possibilities are endless! The only way to learn this language of puzzles is practice, practice, practice.

An example of a puzzle. How would you start on this?

This year’s hunt was the best in recent history. You may call me biased since some of my old friends helped write the hunt, but it was one of best weekends my teammates and I had had in a long time. Not only were the puzzles top notch, but there was also something entirely new this year: the Projection Device, a virtual simulation of MIT campus that you could walk around with other hunt participants. I could explore an actually** infinite corridor, sail a lobster-infested Charles River, traverse the ghost-filled tunnels, and, most excitingly to me, visit my undergraduate dorm. 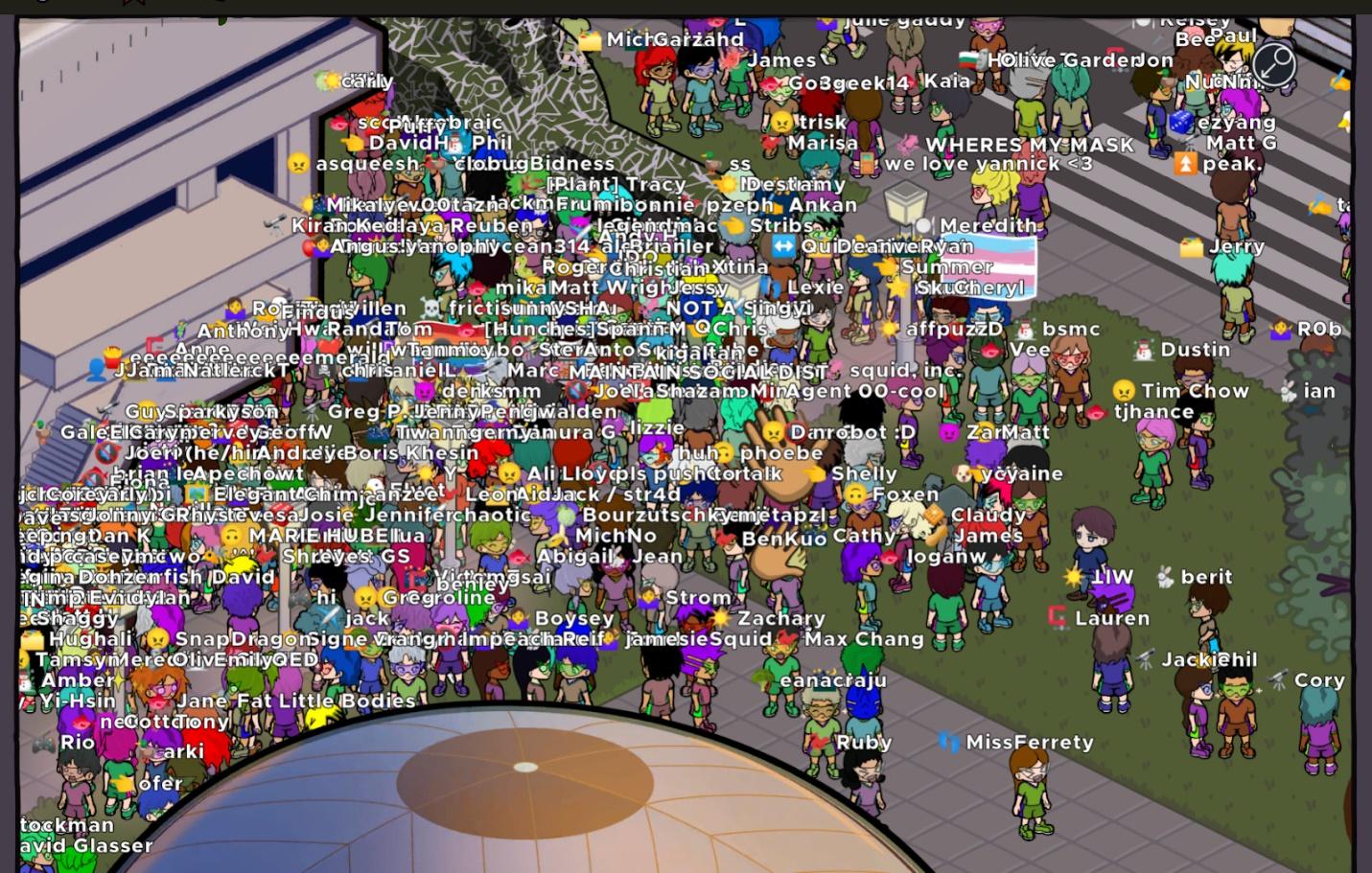 It could get quite crowded at peak Hunt!

It sat where the sidewalk ended: Next House. Seeing that digital representation of my old home made my heart ache. And so did the Discord server my team used. Friends—ones I either had only communicated with over text or hadn’t at all since COVID kicked us off campus—vibrantly existed again. The Mystery Hunt ripped open a wound that I knew the pandemic had made, that had been hurting me for months, but that I had become dulled to.

Putting it delicately: the pandemic sucks. When it started, I was in my senior spring, already dreading saying goodbye to everyone. COVID ripped the Band-Aid off, turning our plans of doing one last fun thing into unfulfilled dreams, possibly forever. I won’t lie and say that this lack of closure didn’t play a large part in my decision to go to graduate school here.

I was reminded of a Zoom meet-up that I attended last fall. At one point, I made an offhand reference to the Infinite.

“Sorry?” another first year asked, “The what?”

“You know,” I responded, the smile on my lips fading, “The Infinite Corridor? The long hallway off of Lobby 7?”

“Oh,” they responded, vague recognition dawning in their eyes, “I read about that.”

The fact that an MIT student, a few months into their MIT career, didn’t know what the Infinite was felt so intrinsically wrong. When I lived on campus, I would reference the Infinite daily; it was as ubiquitous to the MIT experience as taking a class in 26-100, finishing a pset on campus at 4 am, grabbing an overpriced snack at La Verdes, watching student theater in La Sala – oh, wait a minute.

If I’m going to be honest with myself, non-COVID Mary’s grad school life would have a lot of things in common with my current grad school life, since I work primarily in coding and simulation. Frankly, I might have been frustrated about days when I would have to go to campus for a single hour-long class.

But that night of Mystery Hunt, looking at the familiar sights that were both twenty minutes away and so, so much farther, I finally realized the extent of what we all have lost. All the good from being on campus, from the fun things to just waving hi in the hallways, more than make up for the bad. That night, I had a soft recognition of how lonely I felt about everything. I yearned for what I used to have, and what I had once been promised to have again. It all felt so far away.

Then one of my friends joined me in a voice channel.

“Hey Mary!” he said, “Can you help us collect SIXTY EGGS?”

Despite it all, I smiled.