Is grad school harder than a headstand?

As any millennial, I spend a lot of time on social media. Facebook is my go-to place for cute animal videos or life updates from baby boomer relatives. Instagram is how I stay posted on what my friends, favorite celebrities, and social media influencers are up to. Every once in a while, you might even catch me opening up Snapchat or TikTok, just to keep up with the ~teens~. But as a scientist, I spend the majority of my time on Twitter.

Scientists are serious people, you may say, who don’t have the time or the interest to waste precious hours on the internet when those hours can be spent running experiments in the lab. I say that’s BS. For me, a chemistry PhD student, Twitter is probably one of the most valuable apps on my phone: with Twitter, I can engage in scientific conversations with people all over the world at different stages of their careers without having to leave my desk. The best part about it is that I’m not the only scientist who thinks so—lots of high profile investigators and journals are active on Twitter, in addition to other lowly graduate students like myself. 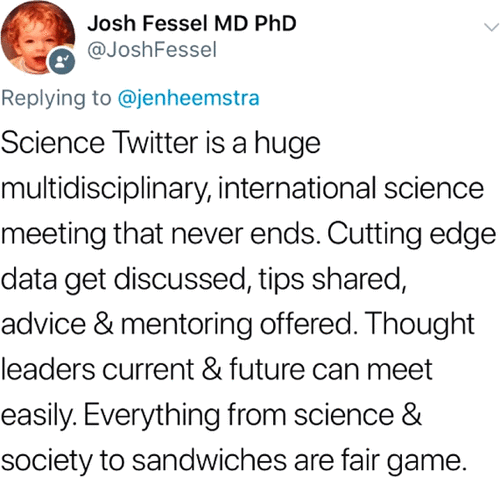 Science Twitter is an entire subculture complete with its own memes, celebrities, and hashtags, and it’s worth it for any grad student to set aside an hour or so to explore it on their own. Here are just a few of the reasons that I love science Twitter and I think that you will too.

It’s the 21st century. Almost every major journal or publishing organization has *some* level of social media presence, with most being active on Twitter. Nowadays, besides papers sent to me by my PI, most of my to-read list consists of papers I saw on Twitter. It’s pretty easy to tailor your Twitter feed to your particular research interests. Like many scientists, I follow the big-name journals such as Nature, PNAS, Cell, and Science. However, as a chemical biologist, I also follow smaller journals that publish relevant but maybe lower-impact papers that are relevant to my field, such as JACS, Nature Chem Bio, and ACS Biochemistry. In addition, I follow several labs and PIs whose research I’m interested in. PIs typically share papers that their lab published or that they enjoyed reading, further curating my reading list. Even if I’m just skimming the headlines, checking Twitter every so often lets me keep on top of what other people in my field are currently working on.

Interested in a recent paper from a lab halfway across the world? DM the first author on Twitter. Looking for connections in industry? Participate in a Twitter thread from a company that interests you. Want advice on how to apply to postdoc or faculty positions? Reach out to the general STEM PhD community by tagging your post with #academicchatter. I feel like most scientists are so inundated with emails that I’m more likely to get a reply to my question on Twitter than if I send an email into the ether of some PI’s inbox. In fact, almost every time that I’ve DM’ed or mentioned someone on Twitter I’ve gotten a response, usually with really helpful and constructive advice! Through Twitter, I’ve been able to connect with scientists I respect all over the US and really get to see science through so many new points of view that I wouldn’t have gotten by staying within my academic circle here at MIT.

It’s no secret that STEM fields struggle with inclusivity for women and minority groups. As pressing of an issue as it is, it’s a conversation that many department heads and administrators are still reluctant to have. Twitter is a good place to (politely and constructively) air grievances, connect with other graduate students facing the same challenges, and even organize collectively for change within the scientific community. There are great communities and threads for discussing issues that women, racial minorities, people on the LGBTQ+ spectrum, and those with disabilities and mental illness may face within STEM organizations. Furthermore, many people on Twitter are great resources for learning about how to be a good ally to classmates facing some of the aforementioned challenges. 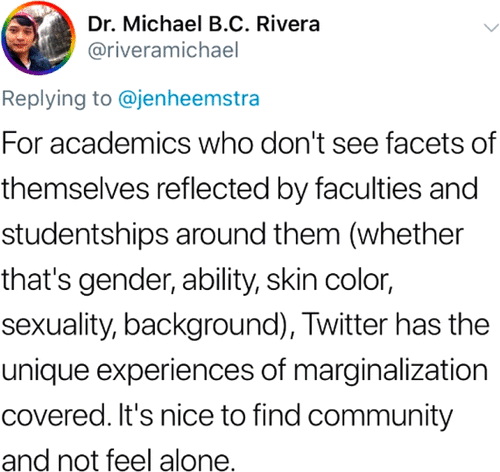 Who doesn’t love a good meme, especially a meme related to science? Our jobs are already hard enough, we might as well be able to get a laugh out of them! Science Twitter is truly a precious source of good, nerdy meme content, and I wouldn’t have it any other way.

If I haven’t convinced you to join science Twitter yet, hopefully a review of the amazing uses of Twitter from a reputable journal can. Like many other scientists, I’ve come to realize that Twitter is an incredible tool for sharing my science with others, finding an online support system, and connecting with like-minded people who one day may be my mentors or collaborators. Give science Twitter a try—all of us online can’t wait to hear what you have to say.