Doing a PhD is a solo trip

How I passed my 1st-year classes

Doing a PhD is a solo trip

It’s time to buckle up and take off

As the plane bound for Switzerland took off towards my first solo trip, the feelings of fear in that 3rd-year PhD student gave way to excitement as I realized: I am alone! What was so different about it this time? I had already been living alone and regularly traveling to visit family for nearly a decade, even before coming to MIT. I’ve always treasured my solo time. But this experience was unique because there was no one to go visit; nobody else was involved, and there was no practical justification for the trip. I had planned everything myself and was doing it simply because I wanted to, and I was doing it despite all the potential reasons to worry and doubt myself. What I didn’t know then was that this solo trip (and the others that followed) would finally remove the mental blockages that had been holding me back on my research.

I am a chemical engineer by training, but I’ve always had a growing desire to engage in some serious math since undergrad. When I came to MIT, I learned to prove theorems for the first time in the Real Analysis class I took, which I loved. Not long after that, in the early stages of my PhD research, I came across a new and unusual mathematical phenomenon in a chemical engineering system of practical relevance. So there it was: the perfect opportunity to develop math theorems and proofs of my own to describe that behavior. However, there was something huge standing in the way: fear. I was paralyzed for months on end, afraid of not being smart enough, experienced enough, independent enough to dig into the problem. There was no one to turn to that could provide the answers I needed, and it was hard to determine exactly which type of background knowledge I should build. I would open up books and papers that made me sure the whole thing was impossible to grasp, and so I’d never sit down with the serious intent to pursue these mathematical lines of research.

On a seemingly unrelated note, one day I decided to make a solo trip. I felt it was about time to start exploring the world, and I couldn’t wait any longer expecting family or friends to plan out a trip for me. Also, there was something really attractive about being able to decide every single aspect of the journey. I chose a country with the prettiest nature I could think of and started to do all the practical, hands-on planning. There were so many things to decide and the options were almost countless: cities to visit, places to visit in each city, where to stay, which flights to take, how to move around each day… the list went on. What if I made the wrong decisions and ended up helpless on the streets of a foreign country? What if I chose not-so-great activities that would end up making me feel disappointed? And, what if I wasn’t capable of enjoying those pretty sights and activities on my own? In the end, I made all the plans anyway, and to Switzerland I went.

To my pleasant surprise, the trip went pretty smoothly, and I felt incredibly happy and fulfilled exploring on my own. Of course, some things went wrong; for instance, my outbound flight was delayed for 24h and I got a parking ticket with my rental car in Lausanne (in my defense, my Airbnb host gave me the wrong instructions). I also had to adjust my plans along the way; I wasn’t able to go to some of the places I really wanted to visit because they turned out to be closed. On the other hand, some of my favorite spots ended up being spontaneous suggestions from locals. With both the good and bad experiences, I discovered a new sense of freedom within me: freedom from the prison built by fear. I realized that there is no such thing as a perfect trip. As with research, no one knows exactly what should be done, what will work and what won’t, but that’s no reason to remain paralyzed. Self-confidence and independence don’t come from thinking that things will always work out, but instead from being sure that sometimes they won’t. And that is ok, because independent people know they have what it takes to make plans and adapt, to learn and improve, to fall and then get back up, and to ultimately achieve their goals. 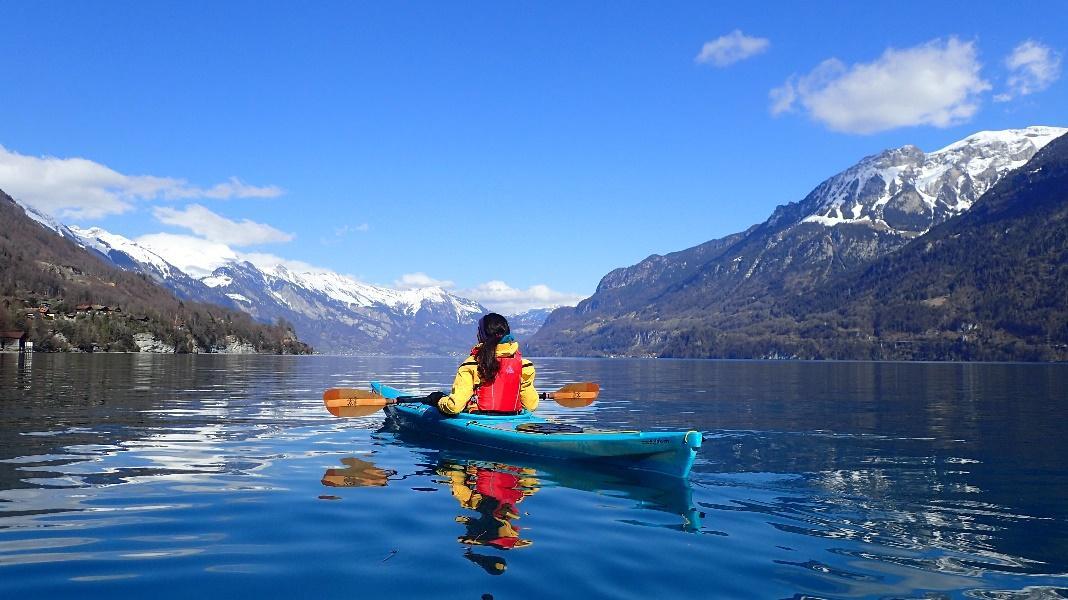 One thing is for certain; at first, you will feel out of place if you dare to move out of your comfort zone. On my second solo trip, I found myself driving a snowmobile for the first time on top of a glacier in Iceland. The snow was icy and quite bumpy in some spots, and in the beginning I was simply not getting the hang of it. I stayed behind as the other tour members sprinted ahead and disappeared, and for a moment I asked myself what on heavens I was doing there. “Don’t lose sight of the group; meters will quickly turn into kilometers here”, the tour guide had said. Thankfully, it didn’t take too long before I was also sprinting into the white vastness, feeling the high-speed adrenaline rush of freedom.

Not by coincidence, sometime after these two trips, I decided to revisit those math books and papers. The exact same words that had almost convinced me to give up now seemed within my reach. Because of this newly found self-confidence, I finally started taking action and making progress, letting my own curiosity and intuition guide the bumpy journey. 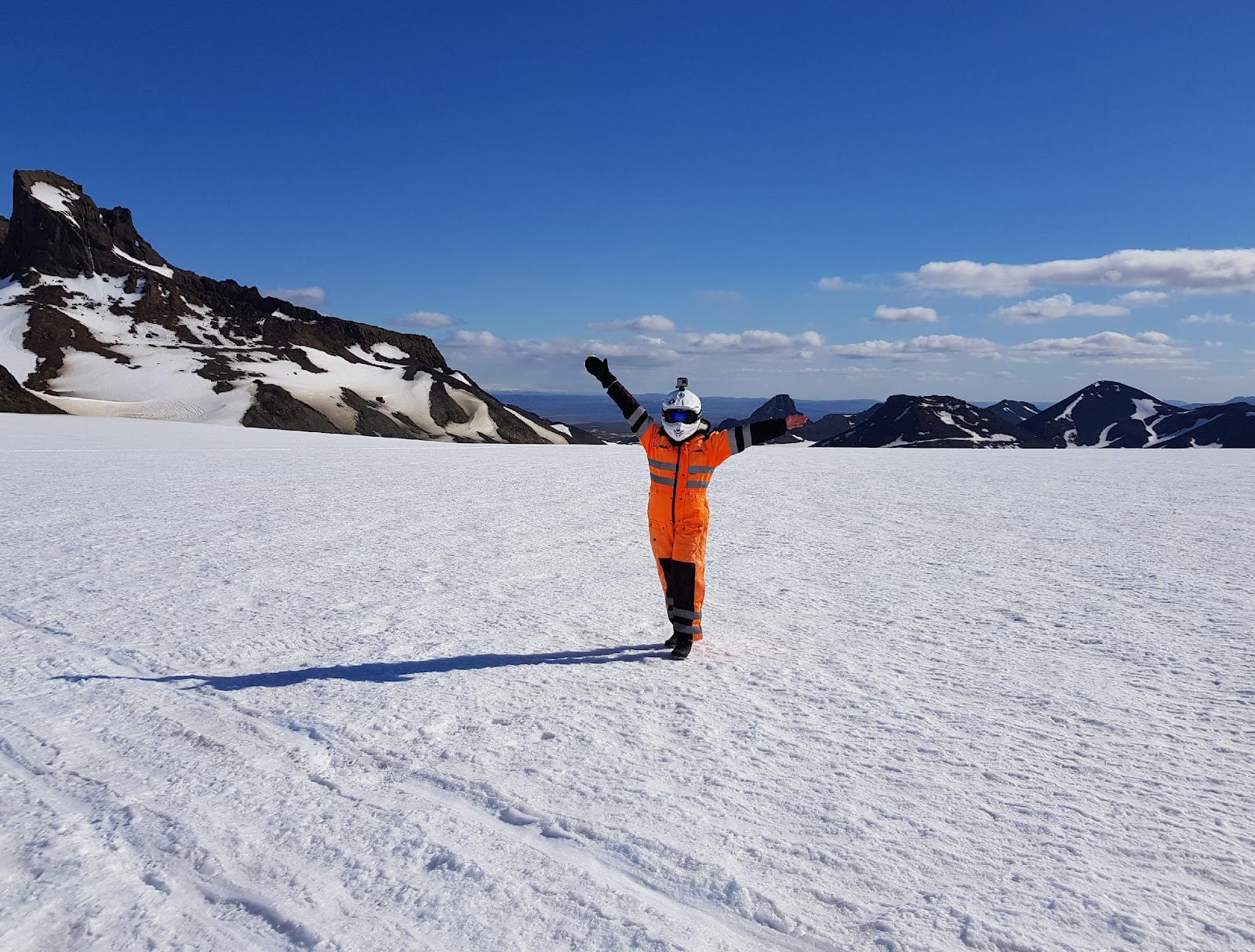 The self-confidence and independence you need to achieve your goals do not appear overnight; instead, you must build them up from personal experience. Begin by tackling smaller challenges, perhaps in completely different fields, and prove to your scientifically-inclined mind that you have what it takes to do that project you’ve been putting off. My solo traveling experiences have provided me exactly the kind of evidence I needed to start believing in myself as an independent researcher. However, I’m not nearly done exploring the unknown, math and foreign countries alike. Don’t let fear keep you from venturing into uncharted territories and, above all, don’t be afraid to go solo.