Color my life with the chaos of trouble 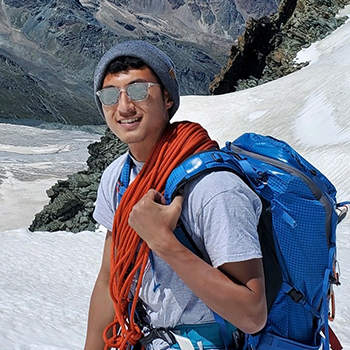 Color my life with the chaos of trouble

Cracking open the trailer door and peeking out, I checked to see if the storm had subsided. Who knew it could rain so much in the desert? Water had begun overflowing the tanks and spilling onto the testing pad. Impatiently, I yelled to the other engineers, “I’m going to try and disconnect the hoses!”

With a surge of adrenaline, I burst through the trailer doors and ran to the tanks. The rain didn’t bother me much – I was already soaked in sweat. I fumbled with the connections and heard thunder overhead. I managed to pull the first hose release lever. Then, moments later, I pulled the second lever and water rushed out! Exhausted, I used the last of my energy to run and seek shelter underneath the solar rover. But I didn’t see quite how low the solar panels were. BOOM.

I found myself on the ground with a headache. Wondering how I got there. Wondering how I ended up doing my research in the middle of the Chihuahuan Desert. And as I looked up, I saw quite a curious sight – a rainbow in the foreground of mountains. One thing I have come to realize through these experiences, is that despite the uncertainties, the chaos, the literal blood sweat and tears – there is beauty in the struggle.

You see, as a part of my research work, I travel to New Mexico. There is a national lab (the Brackish Groundwater National Desalination Research Lab) out here that specializes in brackish groundwater treatment – or treating salt water that comes from wells deep underground. At MIT, I work in the Global Engineering and Research Lab (GEAR lab). As part of our work, we build systems that desalinate and treat this water with the aim of making it cheaper and more accessible to highly-constrained communities: from coastal villages in Uganda to farmers in Jordan. After the hours spent on chalkboards coming up with the theory, and the ceaseless hours designing and constructing the system, someone has to get the engineered beast across the country. Someone has to set it up. Someone has to test it and prove that it actually works. In this case, that someone was me.

Just a few days earlier, I was behind the wheel of a truck, towing over 10,000 pounds of equipment, towards the research laboratory. We’d made some great progress and covered some serious distance in a single-day drive starting from Minnesota. We had already driven from Boston to Buffalo, Buffalo to Chicago, Chicago to Minneapolis, and now we were making a push towards Albuquerque. After deciding we deserved some dinner, I pulled off the freeway into an Applebee’s – one of the few places open at 9pm. As I got out, I noticed something didn’t look quite right. One of the wheels was missing from the trailer. An entire wheel. No joke.

At this point, we were in the middle of Kansas. Every shop and garage were closed at this hour of night. On top of that, we had to pick up another researcher from Santa Fe in the morning. And Santa Fe was approximately 600 miles away. We had to fix the trailer ourselves to have any chance of getting to New Mexico and getting the system setup within our tight timeline.

I found myself calling around to every store – anything remotely close to automotive – listed as open online. We found two places open and guessed the parts that we would need to repair the missing wheel. Before I knew it, I was hammering the back of a trailer rotor, attempting to replace the wheel, in the warm glow of an Applebee’s parking lot. Workers would go out for breaks, taking a smoke or eating dinner and would stand outside and watch us. Hours later, we got the spare tire on and limped another 30 miles to one of the few hotels with vacancies.

Before we left, the workers were kind enough to give us free lemonades. Best lemonade I’ve ever had. Again, it’s the little wins.

The very next morning, we were in front of a closed Hobby Lobby store after another trip to AutoZone for the right sized studs (bolts that attach the wheel to the rotor via lug nuts), ripping the wheels off once again to make the fix. Eventually, we were on the road! I can’t tell you how good it felt to be driving 70 mph on the highway with the windows down.

I also can’t fully explain how many more unexpected challenges happened that trip. Or the other five trips I’ve taken to the desert. It’s always something. I’ve had pipes burst in my face and pumps run backwards. I’ve painted a trailer floor at 1am and gone on endless consecutive Home Depot runs after forgetting yet another required component.

Research is hard. But, my best advice to my fellow researchers is to always try to persevere. And to always try to see some beauty in the struggle. And of course, (rule #32) enjoy the little things. They’ll get you through the daily grind.

That rainy afternoon, I got up from the ground and went back to the trailer. The show must go on. Later in the day, the rain subsided, and lo and behold, the system was finally working! After years of effort, it was running fully autonomously, creating drinking water.

Now, as I write this little story to you, I find myself on a plane back to the same desert. Ready for more research adventures and of course, more trouble.

Figure 4: Me, on the roof of the trailer and functioning desalination system.