A stroke of luck?

A stroke of luck?

Hospitalization during a pandemic

Back in April, I wrote about how running has remained an important form of stress relief to me during the pandemic, despite the loss of the usual social runs and goal races that motivate me to put on my shoes and get out of the house. On April 20th, I was meant to run my first Boston Marathon. Instead, I went out for a 10-mile solo run that incorporated the last couple of miles of the course. It made me feel strangely both more happy and more sad about the whole thing, especially when I saw two other masked runners taking selfies with the dilapidated remains of the 2019 finish line painted on Boylston Street.

Two days later, I woke up with a dead arm and thought I must have slept on it awkwardly. With classic grad student priorities, I ignored it and called into my research meeting, despite struggling to take notes because my hand wasn’t working. After noticing that my face felt weird when I tried to eat, I called MIT Medical to ask about how to get an Urgent Care appointment (introduced during COVID-19), and the receptionist informed me that they weren’t giving them out to “just anyone”. Luckily she got a nurse to call me back to discuss my symptoms, because that nurse insisted that I needed to go to the ER immediately due to the possibility that it was a stroke. Bizarrely, this was my most emotional reaction of the entire day; I nearly started crying, because going to the ER in the middle of a pandemic sounded incredibly risky.

Checking in at the Mount Auburn ER was an extremely odd experience. I was the only person in the waiting room, and I sat there wondering if I was drastically overreacting to the entire situation. How many healthy, athletic 30-somethings have a stroke out of nowhere? Wasn’t it more likely that I had pinched a nerve or something? But as soon as I was called in for triage, the medical staff began hurrying around, not even waiting for the doctor to finish asking questions as they prepared to take me for expedited testing.

After an inconclusive CAT scan and a chest x-ray, an MRI finally confirmed the diagnosis several hours later: I had had an ischemic stroke. This is the most common kind of stroke, caused by a blockage (often a blood clot) preventing blood flow to part of the brain. Over the course of the day, symptoms on my dominant side continued to get worse, with my right foot starting to drag and my right hand coordination becoming more and more unpredictable. One of the doctors even asked me if I thought one side of my face was drooping slightly or if I “always look like that”, which I found hilariously rude, although my family refused to find my texted updates from the hospital all that funny.

In between tests and talking to various doctors, I distracted myself by browsing on my phone and saw that articles were being published online about a potential link between COVID-19, clotting complications, and an increased incidence of strokes in young people. The very same day I ended up in the ER, theories about this link were just being published in various media outlets. However, although Mount Auburn tested me twice for COVID, the results came back that I didn’t have an active infection at that time.

I spent three days hospitalized, alternating between sleeping long hours and frustratedly trying to use my right hand as best as I could, while sometimes inadvertently flinging plastic cutlery across the room. Medical staff stopped by from neurology, cardiology, hematology, speech therapy, occupational therapy, physical therapy… so many people that I found it hard to keep track when they asked if I had already seen their colleague. I explained my low blood pressure and heart rate by telling the nurses “I’m a runner”, and then they joked about it every four hours when they came by to check my vitals, including one nurse who terrifyingly burst in for a 5am check with a loud Boston-accented “SO YOU LIKE TO RUN MARATHONS, HUH? THAT’S WHY YOUR HEART IS SO BRADY!” It turns out this was not a reference to Tom Brady.

Both in and out of the hospital, I asked multiple people when I would be able to get back to running, and had confused doctors tell me, “I don’t know, we usually try to help old people walk to the bathroom independently… we don’t really see people who run 50 miles a week.” Zoom speech therapy helped a lot with my facial asymmetry and slightly slurred speech (try saying that with a lisp), but I struggled to access occupational and physical therapy in the midst of lockdown, working mainly with the initial list of exercises I had been given in the hospital without the ability to follow up. I spent a lot of time napping, and neurology barred me from attempting to run while my body so obviously needed my energy elsewhere. However, I was encouraged to walk as much as I could in aid of recovery, and threw all my usual training motivation into that. It took about a week to build up to my goal of 10,000 steps a day, and I dragged myself around the neighbourhood determined to make a habit of reaching that target.

For the first few weeks, napping, walking and dealing with all of my medical appointments occupied me full-time. Gradually I began to feel a little less tired, and although none of my follow-up tests revealed an explanation for the stroke, eventually neurology approved me to run again. I resumed in fine style by taking part in my friend Sydney’s 23rd birthday running challenge, the Run Raisin, as the very first run of my recovery: run 2.3km (~1.4mi), eat 2.3 scoops of ice cream, run another 2.3km. I am proud to report that although I was not remotely close to being the fastest contender, I am the only person who got faster AFTER the ice cream. 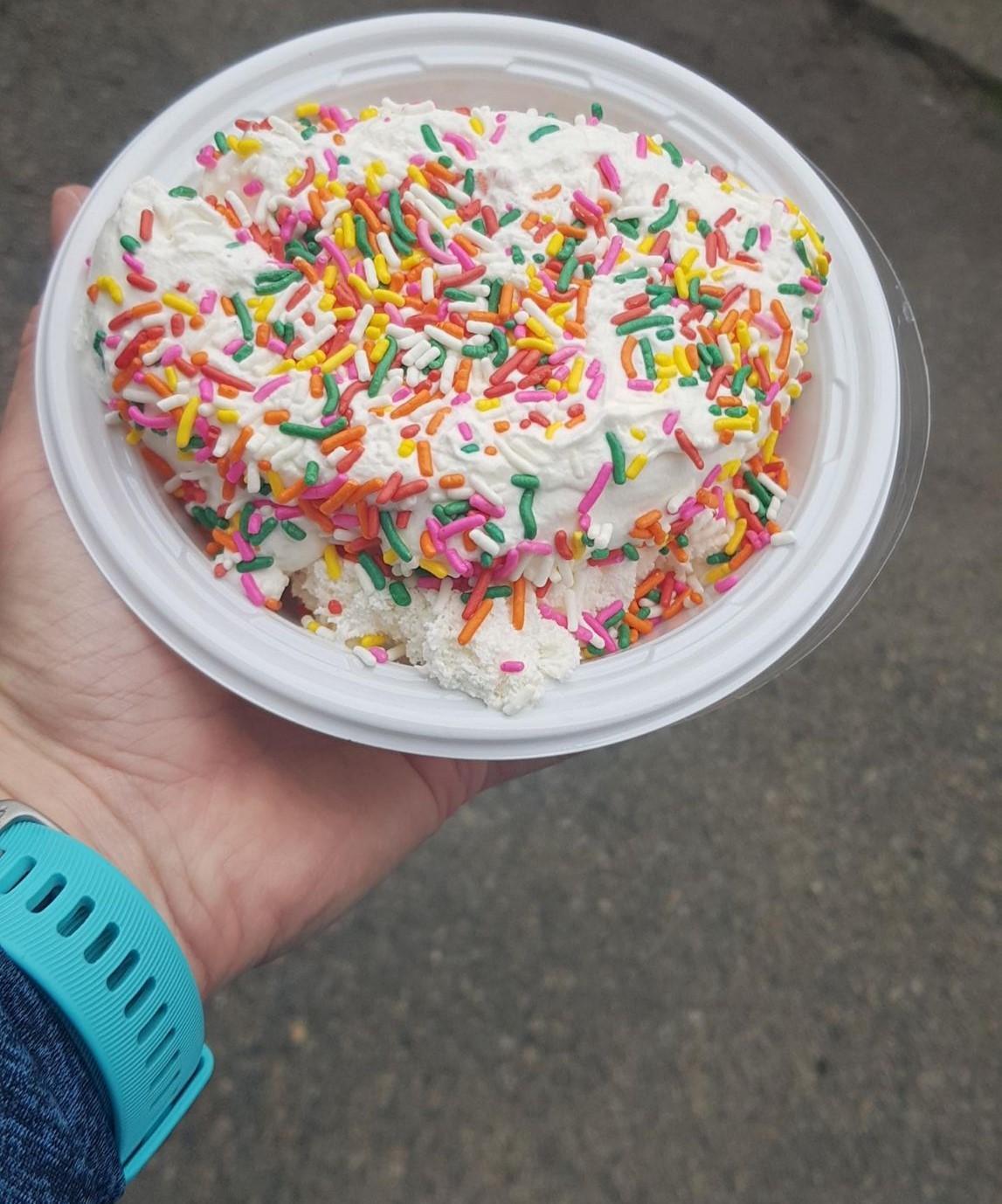 This is too much ice cream for the middle of a run.

That was in May, and I ran a grand total of 6mi in my first week, split into three short runs. Being able to run again helped a surprising amount with feeling more normal. Over the summer, I struggled with the fatiguing effects of the heat, and learnt how a poor night of sleep now wrecks my entire following day. I gradually built up my return to both research and running. By the middle of the summer, I could give weekly updates to my advisor again. By August, I had slowly built up to a post-stroke high of running 40mi a week. And between September 7-14, runners who were registered for the Boston Marathon in April were able to run a ‘virtual’ marathon, tracking their own time with a phone or GPS watch and logging it to receive their finisher’s medal and t-shirt. I was certainly slower than before, but I was very glad simply to complete the distance.

Half a year after my stroke, I wonder if I’ll ever have an explanation, especially given research suggesting that COVID-19 antibodies decline rapidly after a few months. It may already be too late to get a conclusive answer about whether I ever was infected with the virus, or whether my stroke was a strange coincidence in the middle of a stranger time. A post-stroke solo run along the river in September is about as far as you can get from my imagined experience of a crowded, energetic marathon through the city in April, but I’m grateful to still have had the ability to run the distance nonetheless. Fingers crossed for Boston 2021…

Huge amounts of gratitude must go to Dr Mackel at MIT Medical (shoutout if you need a sports medicine specialist!), GradSupport in the Office of Graduate Education, and MIT’s Disability and Access Services office. MIT has a lot of resources that can help graduate students in all kinds of unusual or difficult circumstances, and I very much appreciate the help I’ve received from various sources. The AeroAstro REFS program was also helpful in suggesting useful contacts, and many departments at MIT have an equivalent group.