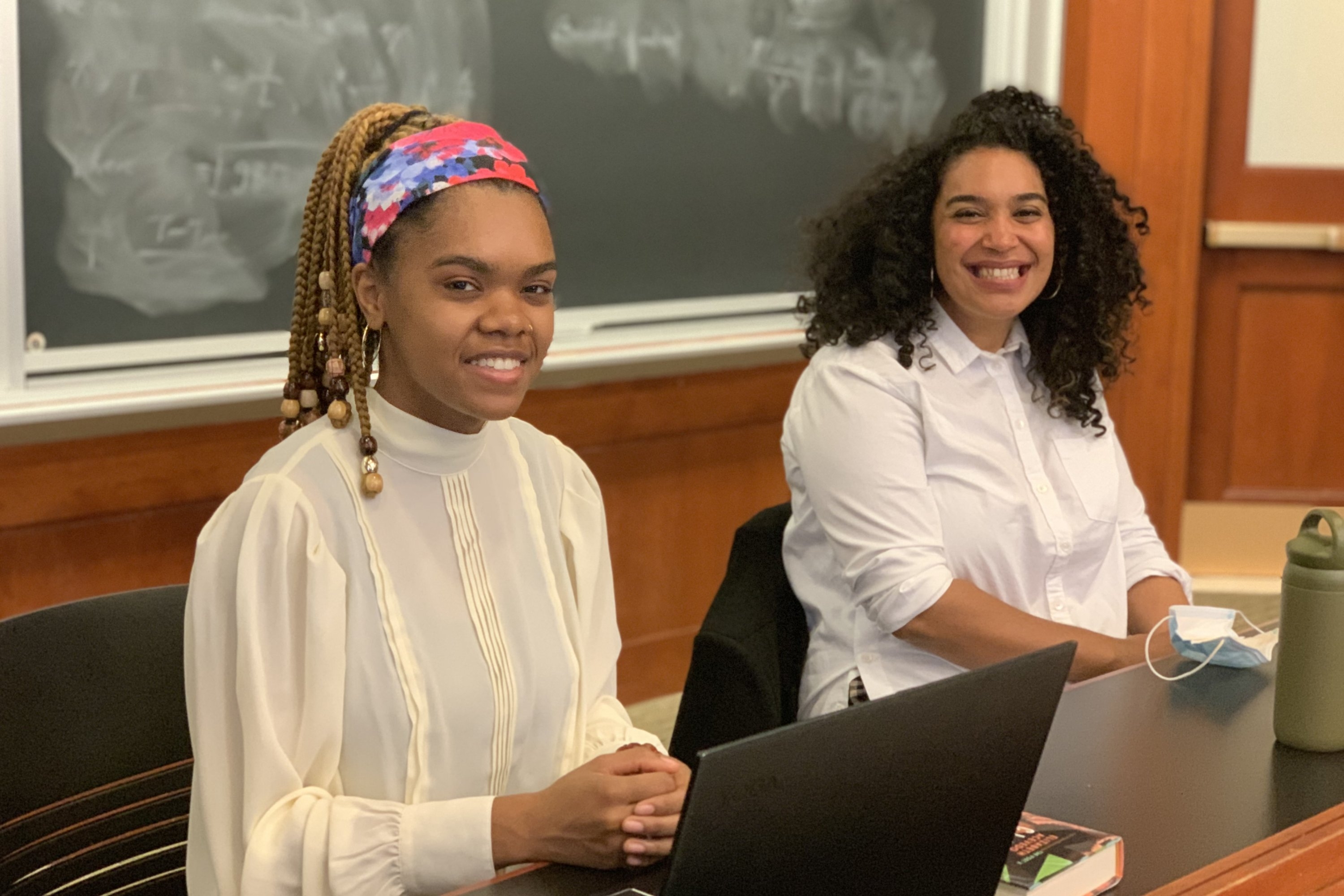 On Thursday, April 21, the air in MIT room 3-270 was electric with excitement, as poet and novelist Elizabeth Acevedo took the floor, along with student moderator Nailah J. Smith ’22. Acevedo is Afro-Latinx, born in Harlem, New York, to Dominican parents, and one of the most acclaimed young Latinx writers on the contemporary literary scene. A dynamic speaker, she is a national poetry slam champion, young-adult novelist, and the winner of prestigious literary awards, including the National Book Award for Young People’s Literature, the Michael L. Printz Award, and the Carnegie Medal. Smith, her student interlocutor that day, is herself a budding novelist and an award-winning writer, having garnered prizes such as the Louis Kampf Writing Prize (2019) and the Ilona Karmel Writing Prizes (2021 and 2022) at MIT.

The two women had been brought together before an in-person audience of some 50 people, with an additional 90 participating online via livestreaming for the MIT Reads program’s spring 2022 event, “A Conversation with Elizabeth Acevedo,” co-sponsored by the Program in Women’s and Gender Studies, MIT Global Languages, the MIT Libraries, the Committee on Race and Diversity, Hermanas Unidas, My Sister’s Keeper, and Latino ERG.

By inviting Acevedo to speak at MIT and showcasing her work, MIT Reads and the event co-sponsors sought to engage the campus community with a writer whose person and works provide vital insight into a crucial, yet often overlooked, aspect of U.S. history and society: the influence of the Caribbean diaspora and the rich stories, traditions, and cultures of the Dominicans, Cubans, and Puerto Ricans who have shaped the character of their adopted homeland.

Acevedo had come to campus to read from her novel “Clap When You Land” (2020). The novel-in-verse probes the events surrounding the Nov. 12, 2001 crash of American Airlines Flight 587, the second-deadliest aviation accident in U.S. history, in which 260 passengers on the flight and five people on the ground perished. Over 90 percent of the passengers on the flight, which was bound for Santo Domingo, were of Dominican descent. Thirteen years old at the time of the crash, Acevedo later wrote “Clap When You Land” as a way of reflecting upon the schism she noted between the devastation the crash caused within the Dominican-American community and the relatively fleeting coverage by major U.S. news outlets of the crash, overshadowed as it was by the Sept. 11, 2001 terrorist attacks. “Clap When You Land” is thus a work that considers “who matters and deserves attention in the media,” as Acevedo writes, while also exploring related issues of race, social class, and trauma.

The idea to invite Acevedo to MIT first arose when Spanish lecturers Liana Ewald and Ana Yáñez integrated selections of her novel “The Poet X” (2018), translated into Spanish, into the Spanish language curriculum in MIT Global Languages. Together with Portuguese lecturer and advisor to the MIT collaborative initiative Hermanas Unidas, Nilma Dominique, Ewald and Yáñez approached MIT Reads with the idea of selecting a work by Acevedo for its spring 2022 program. As Nina Davis-Millis, director of community engagement for the MIT Libraries recalls, there was not a moment of hesitation amongst the library staff: “In choosing titles for the MIT Reads program, we’re looking for books that explore social justice themes, have literary merit, and are appealing enough to tempt busy MIT people to read them. “Clap When You Land” richly meets these requirements — it’s lyrical, thought-provoking, and somehow just plain fun despite its dark themes.”

The event, “A Conversation with Elizabeth Acevedo,” represented a perfect melding of the aims of the campus units and groups that sponsored it. MIT Reads seeks to “bring the campus community together through shared reading and discussion” of books centered on diversity, inclusion, and social justice. Women’s and Gender Studies trains students to think critically about gender equity. Global Languages strives to educate students in languages, cultures, and intercultural communications. The Committee on Race and Diversity aims to foster racial and cultural diversity on campus, with a special emphasis on cultivating communication among different campus constituencies. Hermanas Unidas, Latino ERG, and My Sister’s Keeper are organizations dedicated to supporting Latinas, Black women, and Latinx members of the MIT community.

On that sunny day in April, Acevedo held her audience spellbound as she read from the opening chapter of “Clap When You Land,” which evokes the Dominican homeland of Camino Rios, one of the two sisters and teenage female protagonists of the novel:

I spend nights wiping clean the bottoms of my feet,
soiled rag over a bucket, undoing this mark of place.
To be from this barrio is to be made of this earth & clay:

Following the reading, Smith skillfully guided the Q&A session, observing, for example, “how women constantly show up for each other in ‘Clap When You Land’” and asking Acevedo to reflect upon the use of gender in her novels. The audience seemed at times both giddy and overwhelmed, as members took turns inquiring about issues such as the nature of the lesbian relationship at the novel’s center, and making more personal inquiries, for instance, about how Acevedo navigates predominantly white, elite spaces in her appearances as a writer and widely sought-after public speaker. The event closed with an impromptu recital by Acevedo of a poem praising her Afro-Latinx ancestors, which was met by raucous applause.

As for Smith, the formative role of humanistic study and inquiry on this recent MIT graduate is clear. She is jubilant in reflecting about the event and her participation in it:

“As someone passionate about literature and writing, I’ve watched countless talks like this, both in-person and online, but it was a completely different experience to be the one front-and-center, and to have the chance to connect with the author on a personal level. Acevedo is an amazing speaker, and I discovered just how much we have in common as writers. Her care for people and their lives is clear in her characters and the passion she puts into her work. My favorite part of the event was the Q&A and witnessing how many people felt seen by her work and moved by her words.”

As a double major in electrical engineering and computer science and creative writing, Smith will carry with her what she has learned at the Institute at large, and in the School of Humanities and Social Sciences specifically, in her next endeavors. She spent much of her final semester at MIT penning her senior thesis, the initial chapters of a novel she is writing under the direction of Professor Helen Elaine Lee. Her Spanish studies through Global Languages have inspired her to continue advancing in the language, which she will do as the recipient of a Fulbright scholarship to Colombia next academic year. While in Colombia, Smith plans to pursue a personal and intellectual interest in Afrolatinidad, which she first nurtured while studying in Brazil during Independent Activities Period 2021 in MIT literature lecturer Joaquin Terrones’ course, “Race, Modernity, and Migration in the Americas.”